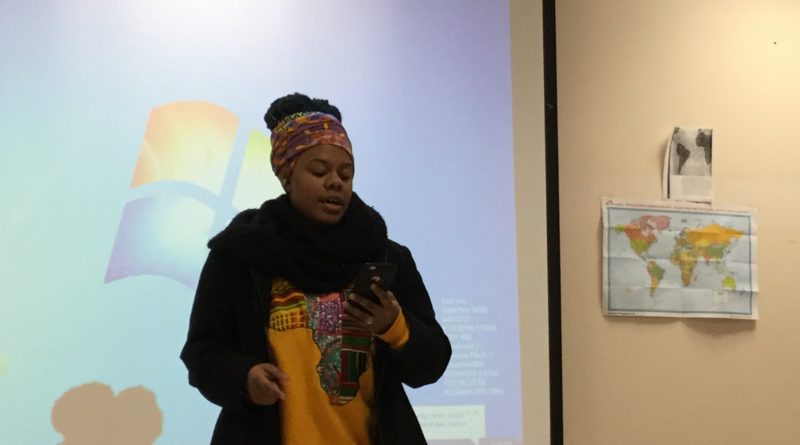 In honor of Women’s History Month, the Women’s center at York College hosted their first ever poetry slam A Celebration of Women’s Poetry, on Tuesday, Mar. 20.

The poetry slam was held in the African American Resource Center and moderated by Cassita Charles, a college assistant from the Women’s Center. The poetry slam was meant to celebrate Women’s Month and give students a platform to showcase their poems and spoken word pieces that were centered around the theme of uplifting women.

The event started with Charles playing a clip of Maya Angelou performing her poem Still I Rise, before the three students in attendance went up to deliver their poems and spoken words.

The first poetess to perform was Camryn Bruno, who performed a spoken word piece she had written for a campaign on domestic and gender-based violence in the Caribbean.

It was a moving spoken word where she called for action to stop the abuse that women face on a daily basis.

One of the lines from her spoken word read “This is more than just a trending hashtag to raise awareness. It’s a peek into the day of a woman’s life through 140 characters. You cannot join in on catcalls and then retweet the hashtags.”

Bruno said that she had written her spoken word poem to help raise awareness on gender based violence, women’s rights and other social issues.

After the other poets presented their work, Bruno then went back up to the front of the room and read her second spoken word which was on society’s supposed recipe for the “perfect woman.” There she talked about how men and society constantly dictate how women should act and how the degrading music lowers the self esteem of women and makes them question their worth.

The second poetess to showcase their work was Amy Lay who performed an original spoken word where she asked for someone to challenge her intellectually and help her learn new things.

Afterwards Cassita Charles read Phenomenal woman by Maya Angelou, a poem she believes personifies her personality and her quiet confidence.

“This one is more kind of like quiet confidence which personifies my personality,” said Charles.  “It speaks to how I feel, I may not be the prettiest or the most desirable but it doesn’t matter because it’s all in your confidence and how you love yourself and that’s more attractive than any amount of makeup or tight dress or anything else and people respond to it.”

Folashade Olatunde also performed an original poem called Love Yourself . The poem asked the question of what does it mean to love yourself and included simple ways to show love to yourself. The last sentence of her poem ended with her saying “loving yourself, is it simply just saying you love yourself?”

Olatunde said that she had written the poem spontaneously one night after thinking about how so many people, including herself, fail to truly love themselves.

“A lot of us want to love ourselves but we don’t know how,” said Olatunde.

While it may have been the first poetry slam hosted by the women’s center Charles confirmed that she hopes that in the future they could do it again and hear some more amazing poems and spoke words.