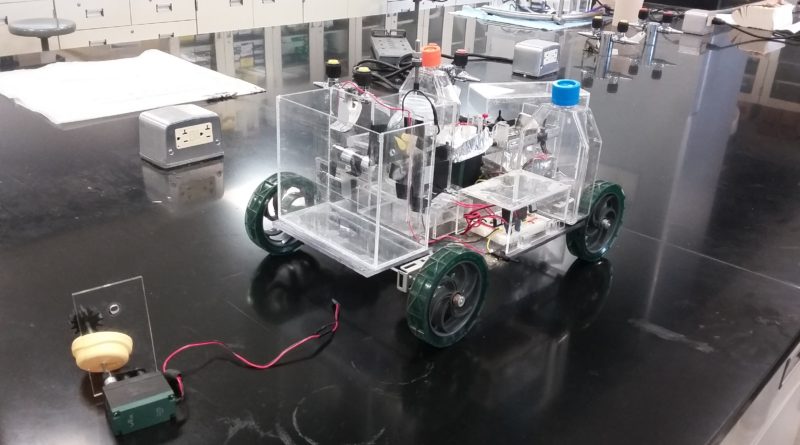 Dilan Mataraarachchi walked into the lab “301.2” located in the Grove School of Engineering at City College of New York. He grabbed a pair of goggles and headed to the cabinets where the ChemE car is stored.

He took out a big, heavy purple box and revealed the plexiglass crafted ChemE car called Iodonator c8. Dilan, 28, is a chemical engineering major and the Captain of the ChemE Car team.

“The ChemE car is something in which we can use our knowledge in physics, organic chemistry, and reactions engineering which is also called kinetics,” said Dilan.

Iodonator c8 is a shoe box size car that is powered by a chemical reaction. It doesn’t use any type of brakes, computer programming, or electrical circuits to be stopped.

The Iodonator c8 was built from scratch by the ChemE Car team. The car’s battery was built by Dilan in the CUNY Energy Institute located in the Grove School of Engineering of CCNY. After the car was done, the ChemE Car team used hydrogen peroxide and ascorbic acid to make chemical reactions.

The team’s goal is to win the National ChemE Car Competition taking place in San Francisco in November. The team is trying to get enough funds to go to California. They created a GoFundMe page for the ChemE car.

“So the basic goal is, the car must stop at a certain distance,” said Dilan. “It has to be between 15 and 30 meters.”

Let’s say the distance is 20 meters,” said Dilan. “Whoever crosses the finish line first wins the competition. That’s the main purpose of the ChemE Car competition.”

Two years ago, Kavindra Singh, the captain of the ChemE car at that time, did a presentation of the car during a thermo-dynamic class Dilan was taking. “At that moment I thought, ‘wow he has to design something that runs with a chemical reaction which is related to chemical engineering.’ So, that was the start,” said Dilan.

“I give him the full credit for our victory in the regionals, he is highly motivated,” said Aftab Siddiqui, 26, Senior Chemical Engineering major and member of the ChemE car team.

On the second day in lab 301.2, Dilan, wearing blue latex gloves, mixes ascorbic acid, hydrogen peroxide, starch, and water to prepare chemical solutions for the car with other members of the team. He kneels for a better view of the measurements while putting water inside a graduating cylinder. Then, carefully starts dropping a clear liquid inside the graduated cylinder. ]

Shakir Julien, 21, a Chemical Engineering major, mixed the solutions in a balance that made the solutions move in a circular motion, while Olivier Pierre, 23, member of the ChemE car, transcribed the data.

Dilan started working on the ChemE car just as a team member and now is managing the development of the team’s chemical achievements.

“He wants to win, this is super important for him,” said Ilona Kretzschmar, the Chair of the Chemical Engineering Department. “He is always smiling, but he is very strong headed.”

Once Dilan became the captain of the ChemE car team, he divided his team members into groups. They had meetings once a week to discuss the ideas for this year’s car.

“For the Regionals there were times we would start at 2 p.m. and we would end at 10 p.m.,” said Shakir Julien, a member of the ChemE car team. “Two weeks before the conference, we started to work every single day.”

“Working in the ChemE car is a good opportunity for whoever is going to work as a captain to show leadership,” said Dilan.

He said that the main thing he learned from his team members is how to get the work done together as a team.

His time as captain of the ChemE car team will end in December, but he plans on working in a power plant after graduation because he wants to work doing chemical reactions.