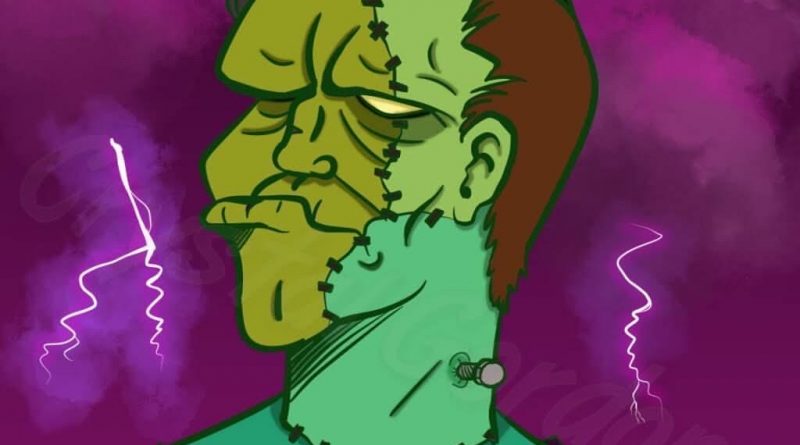 Crystal Gordon started her artistic journey at 13 and at 18, has created digital art ranging from Frankenstein to an aged Aang from Avatar: The Last Airbender.

Gordon, a freshman at York, is  a “self-taught artist” who has been in the art scene for about five years. Despite being involved in art for those years, Gordon says she is still new to it and is progressing with the style in which she practices it. Although she has never published her work professionally, Gordon’s art can be found on her Instagram and Twitter page.

“Art for me has always been a way to vent my feelings or spread awareness about certain topics,” says Gordon.

Gordon participates in art competitions. A recent one was for breast cancer awareness, sending postcards with messages of reassurance to cancer patients and others who are hospitalized.

Gordon also chooses to dabble in art for fun, such as when she participated in an art challenge  called “Inktober”. Inktober is an art challenge that takes place throughout the month of October, aimed at bettering one’s art and drawing styles. Inktober is where Gordon designed a unique portrait of Frankenstein titled, “Mindless”.

Gordon says she chose Frankenstein because of the prompt for the piece which was: “Mindless”.

“So I thought, Frankenstein, he’s mindless and he does what he’s told and his creator told him, you have to do this and that; he doesn’t think his own thoughts. He wasn’t really living, he’s just existing,” says Gordon. “ He was brought into existence, but he doesn’t really go any further than that.”

Gordon explains that the “Mindless” piece also serves as a metaphor for today’s society.

“The ‘Mindless’ piece is a metaphor for today’s society because at times, society tends to be complacent with what they already know and fears venturing into the unknown,” says Gordon. “This is because they fear being criticized.”

Gordon also co-authored and illustrated INK Literary Magazine, Volume 4, with her friend, Dyani Daniels. She says that the book is a body of student work made up of a variety of themes.

Gordon says she isn’t sure where she wants to go with her art from a professional standpoint, but is interested in game developing and web comics as an option.

“I really love comic books, so I take inspiration from that as well,” says Gordon.

When she began doing art, Gordon says her mom was also an inspiration for her.

“My mom used to draw, but she wasn’t given the funds or opportunities to progress with her art,” says Gordon.

She says that her mom not only didn’t have the money for art school but also because of a lack of opportunity for black artists.

“She kind of lost inspiration because she kept getting told no, because ‘you can’t do this and you can’t do that, you can’t fit in’” as told by many of her mother’s professional colleagues, says Gordon. “She’s still passionate about it and she still supports me so I want to make her proud by saying that you can do these things and you have to be persistent and not take no for an answer.”

Although her mother was a driving force in Gordon getting involved in art, she wasn’t always supportive of her practicing it. She says this had a lot to do with her background.

“I’m of Jamaican descent, so my mother was against me continuing to do art,”  says Gordon. “In Caribbean culture some people do not appreciate art because they do not fully understand what it has to offer or all the different mediums they can use to be creative.”

As someone who was a teacher, Grodon says her mom believed concentrating her time and effort into art was “too much of a gamble,” and it would be better to focus on an academic subject that would land her a career. Despite this belief, her mother’s views eventually changed.

“The more she saw how passionate I was about it, she agreed to support me and even helped me do my first art exhibition.”

Gordon says that sometimes art exhibitions can be costly and difficult to gain traction. On the other hand, she says the internet serves as a way to better draw attention to her art.

“The internet for me is way more interactive,” says Gordon. “I really appreciate technology today. I’m surrounded by a bunch of artists, having a community to just help each other out and expose each other to different apps and programs, to keep doing better.”

Some of these interactive programs Gordon uses include Medibang, Autodesk Sketchbook and Ibis Paint X.

Gordon is interested in nursing as a major but wants to go further with her art. For now, she posts her art on Deviant Art, Art Amino and various social media such as Instagram and Youtube.

“I might do art and animation,” says Gordon. “Although I’m not sure where I’m going with art, I know the future is bright.”