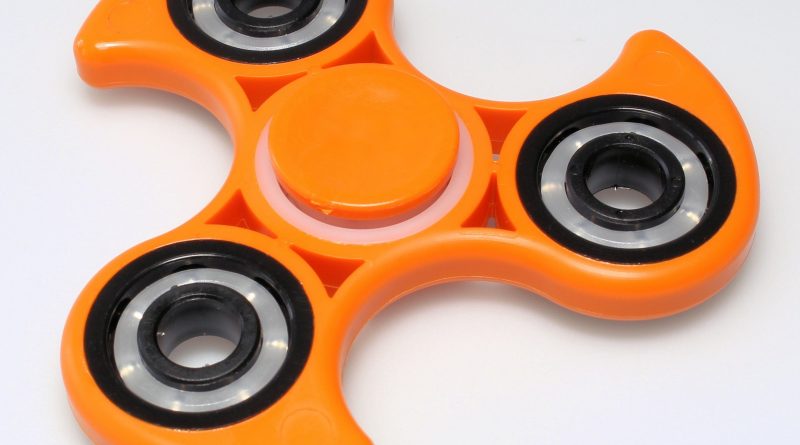 There’s a new toy that has grabbed the attention of kids everywhere. It’s called the Fidget Spinner.

If you’ve been around children in the last few weeks you’ve definitely seen one of these things. It’s a two or three pronged toy, usually made out of plastic or metal. In order to use it,  you hold your fingers together over the middle and use your other fingers to spin– simple instructions.

Jazmyne Eggleston, a public school teacher, said surprisingly she hasn’t seen  any of her student using them yet.

Eggleston, who teaches 6th grade English and Social Studies, said she is interested in giving some out as class prizes and seeing if they would be, “helpful or a hinderance.”

While at work the other day,  speaking to a customer, her son stood next to her  mesmerized by the Fidget Spinner in his hand. He kept spinning it and watching it over and over. “I’m not sure if that’s a good thing or bad, but I’m not the only one,” according to Eggleston.

Kids can be easily distracted from important things but it can also be used to keep children calm when becoming impatient. “Some students get distracted by just having a hat on their desk,” Eggeleston said.

Nine-year-old Myshawn Givens, said “I have three” while pulling the other two toys out of his pockets to show me after noticing me looking at the one already spinning in his hand. He says they’re “cool” and that he doesn’t play with them at school because his mom doesn’t allow him to bring them with him.

Kids love them, but some teachers, not so much. In fact some schools have already banned the toy.

According to Department of Education data, 32 percent of the top 200 American high schools (the 100 largest private and 100 largest public schools) have banned spinners from the premises, or plan to ban the toy in the near future.

It may seem that Fidget Spinners have just recently come out, but the toy was invented in 1997. It was originally marketed as a stress-relief device for people suffering from anxiety, ADHD or autism spectrum disorder.

Dr. Steven Shapiro, chairman of Pediatrics at Abington Hospital Jefferson Health in Philadelphia, told CBS that objects have been used for years to help hyperactive children focus. But fidget spinners can also be helpful for autistic and other differently-abled kids.

Ironically a toy that’s supposed to appease the easily-distracted is causing distractions in the classroom.

Michael Jamison, a tutor at an after-school program, said the toy keeps his students from concentrating on their work. “Even if they’re not the one playing with it, the spinning distracts the kids next to them.”

But whether you believe the toy help or distracts, whether you like them or think they are a waste of time, Fidget Spinners may be a passing trend that won’t stay long. Just like Slinky and Etch- A-Sketch, Fidget Spinners will likely soon be out of trend of the past– just a memory from 2017.