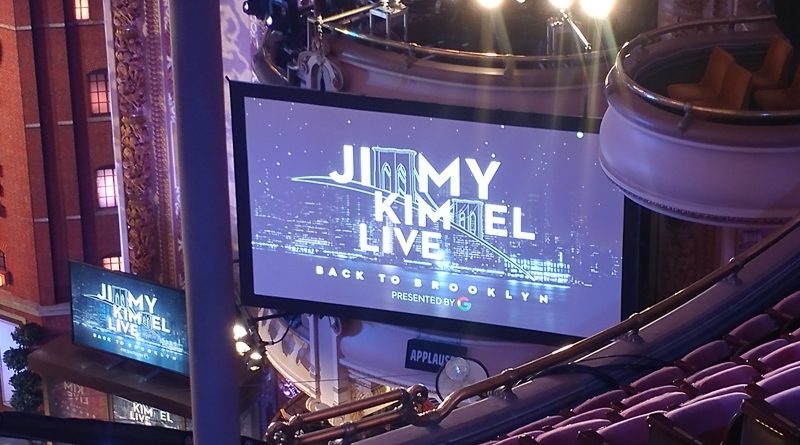 For the fourth year in a row, Brooklyn Native Jimmy Kimmel brought his world-renowned show back to the city that never sleeps.

Right now, Jimmy Kimmel Live! Is one of the most popular late night talk shows in the world, with nearly 3,000 episodes, countless guest stars, and one of the most heated rivalries in television history.

Since 2015, Kimmel has spent a week in October filming new episodes at the Howard Gilman Opera House, located just a block away from the Barclays Center. During his stints in NYC, Kimmel always puts his best foot forward when trying to put on amazing shows and bringing New York based guests onto his show.

During the first Brooklyn week in 2015, some of the guests to be featured included Howard Stern, Michael J. Fox, and members of the New York Mets just days before they were in the World Series.

In 2018, Kimmel pulled all the stops to make sure viewers were entertained featuring Tom Holland, Adam Sandler, and even a killer performance from Eminem. The first episode of the 2018 iteration of Brooklyn week aired on Oct. 15.

In addition to his standard monologue which mostly made fun of Donald Trump, Kimmel had a long discussion with Adam Sandler about his stand-up work and New York. The episode ended with a very special performance by Eminem.

The day that the film Venom was released, tens of thousands of New Yorkers were stunned by what was going on with the Empire State Building at night. The lights were actively changing and flashing, and there were helicopters flying all around.

It turns out this was all a stunt made specifically for Kimmel. On the very top of the Empire State Building, Eminem shot a brand new Venom music video. The video featured the rapper at various points in and on top of the building as well as a scene with Guillermo Rodriguez, Kimmel’s television sidekick.

Guests who appeared the remainder of the week included John Krasinski, Bryan Cranston, Alexandria Ocasio-Cortez, Cardi B, and Bebe Rexha.

Of course, it wouldn’t really be a New York themed episode without New York’s most famous superhero, Spider-man. Thursdays episode featured a brief and unexpected skit where Tom Holland made an appearance as Spider-man, again hilariously featuring Guillermo. The skit was mostly for comedy but Holland also debuted Spider-man’s new suit from the upcoming film, Far From Home.

On their final day in Brooklyn, the staff of Kimmel finished their week by going around the city and talking to Yankees fans about the Boston Red Sox. This was barely a week after the Red Sox beat the Yankees in the first round of the playoffs and the responses were fun to say the least.

Kimmel spent the weekend after marvelling in the city for one last time before heading back west. Knowing Kimmel, he will want to make sure his next time back in Brooklyn in 2019 is even bigger.