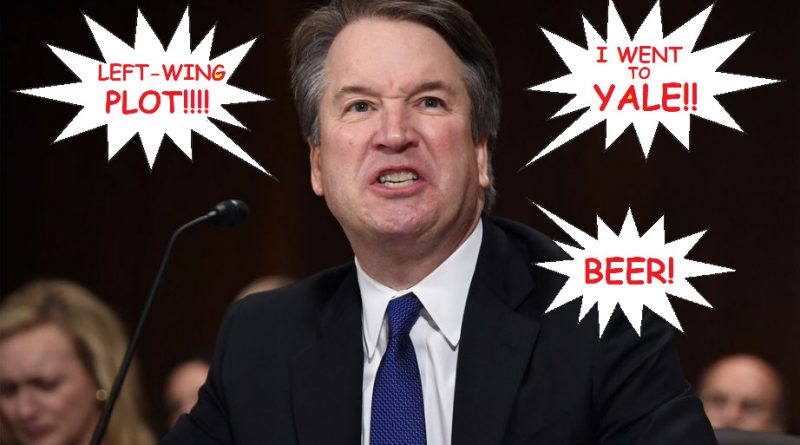 On Nov. 17, 2017, Brett Kavanaugh lands on President Donald Trump’s list of potential Supreme Court nominees. On July 9, 2018, Kavanaugh is nominated to the Supreme Court. On Sept. 16, 2018, Christine Blasey Ford, a Psychology professor at Palo Alto University and a research psychologist at Stanford University School of Medicine, publicly steps forward with her sexual assault allegation against Kavanaugh.

This confirmation battle goes down as one of the most influential yet controversial topics of our lifetime.

We live in an era where the #MeToo Movement has been just more than impactful onto our society.

It’s a movement that is seen as inspirational, histrionic and significant. Trump, who has faced many accusations from notable females in the past, showed his true colors when he described Ford. According to Huffington Post, “Trump called Blasey a ‘very fine woman’” following a Senate Judiciary Committee vote on Kavanaugh.

Then, at a rally in Mississippi on Oct. 3, Trump mocked Christine Blasey Ford for her testimony in front of the Committee.

” ‘I don’t know. I don’t know,’ the President continued. ‘What neighborhood was it in? I don’t know. Where’s the house? I don’t know. Upstairs, downstairs — where was it? I don’t know — but I had one beer. That’s the only thing I remember.’ Trump’s mocking remarks come amid a protracted and heated confirmation process for Kavanaugh,” CNN noted.

Trump had also ordered the FBI to do a background check on Kavanaugh, but still acknowledged the fact that he will still vote for his pick at the end. Now, this is all coming from a man who tried to pay out his accusers in secret, with hush money, to try and stop them from coming forward with Trump’s misdeeds.

At the end, the Supreme Court did confirm Kavanaugh. Even after Ford’s memorable, powerful testimony made on Sept. 27 in front of hundreds of people, televised to millions more in the U.S. and around the world.

“It means that they (Republicans) have tilted the direction of the Supreme Court to the conservative right for at least a generation, in its capacity to shape many critical issues including civil rights protections, workers’ rights, and a women’s right to choose,” said Associate Professor of Political Science Michael Sharpe. “…The recent actions are a sign that US values and democratic institutions are being undermined for both parties and the society. My advice to young and old alike is to join an organization, read credible newspapers and publications, and vote as an active civil society. Informed citizenry and participation are fundamental to our republic”.

Sharpe added that this should be a big concern for both Democrats and Republicans since many members of the Supreme Court have been nominated by Republican Presidents who failed to win the electoral vote.

Ford spoke with tears in her eyes and with a whole lot of boldness. Her testimony will always be looked as a compelling confrontation of the darkest past she has gone through. Ford is a survivor and there are many people in this world who are just as strong and courageous about sharing their personal stories, to let us know that what they’ve gone through is real. There are some people, surprisingly, who do not believe in Ford’s testimony. Some people see it as a waste, as a ‘hoax.’

Sexual assault does happen, and when it does, it changes us into becoming warriors, to concede about the situation and create a change. So, no one, either male or female, who is struggling with opening themselves about sexual assault, should feel like they can’t.

There are people willing to listen. There is absolutely no reason to hide it, to feel ashamed about it. The truth is, this is just the overall beginning of a new way on how our society should view women who have gone through and are still going through sexual assault.

It’s not fair that some women should feel petrified to talk about a situation that has forced them into being viewed as vulnerable, but really, was it their choice to have this happen to them? The bottom line is, it happened and now someone needs to be held up accountable for their actions. As for Congress, they are not much of a backbone support.

U.S. Maine senator, Susan Collins, 65, called for a testimony for Ford claiming that she deserves to be heard. Then, after the testimony, Collins appeared on CNN’s ‘State of The Union’ stating that she doesn’t believe Kavanaugh is Ford’s assaulter. She also went on to say that for a while she was “undecided” on her vote for him because she wanted to hear what the three accusers had to say about Kavanaugh.

This should be another wake up call, that yes, even people in high positions in life do have something in their past that they’re afraid to show. But when certain things are revealed, it is our job, as a democracy, as citizens, to stand up for what we believe serves justice and fairness.