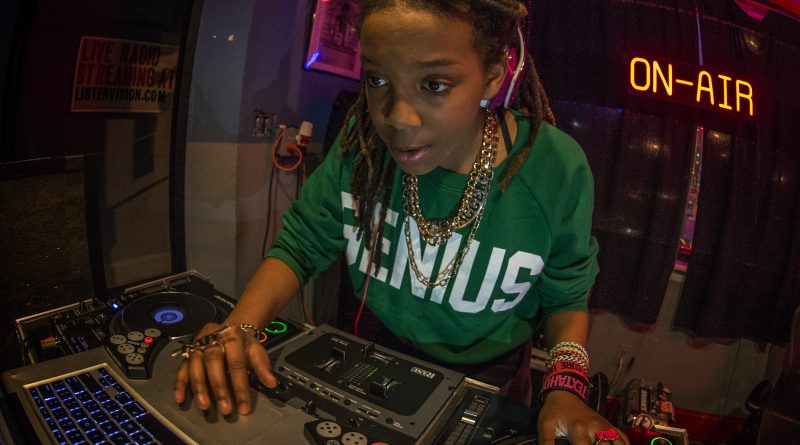 Sierra’s love for DJ-ing began when she was about 6 years old. Her parents, Takicha and Warrick Roundtree, hosted an event called, Untamed Tongues, that featured multiple DJs, rappers, visual artists, and poets.  The DJs caught Sierra’s attention at her parent’s event, and she fell in love with how they used their equipment and their different hand techniques.

“I would always stand right behind the DJ and absorb all the information that I could. It made me want to try it myself,” Sierra said.

Born in Las Vegas, Nevada, Sierra and her family moved to Washington D.C to pursue Sierra’s career as a professional DJ. Upon her arrival, she was recognized and highly requested for her skills. She spins Hip-Hop, EDM, Reggae, Dancehall, R&B, the top 40s, and Trap music.

Sierra regularly booked corporate events and sweet sixteen’s until she stepped up to special events like the U.S National Women’s Soccer team tournament, “She Believes Cup.” She also played RFK Stadium in Washington D.C and has played events in Philadelphia and New Jersey for as many as 16,000 to 26,000 people.

Once Sierra was recognized as a celebrity DJ, she played at the White House for Michelle and Barack Obama, and at the 2014 Annie movie premiere for Jamie Foxx, Jay-z, Beyoncé and plenty more.

In addition, she played during Washington D.C’s, Broccoli Festival, where they promote eating healthy. Celebrities like Future, and Rae Sremmurd also performed.

Sierra has also Dj’d for Essence Magazine’s Music Festival where she had a friendly Battle with Salt n Peppa’s DJ, Spinderella.

While Beauty and the Beatz works hard to entertain, she has already been featured on Sway Calloway’s morning radio show twice and collaborated with a lot of D.C’s local artists, such as Lightshow, Rico Nasty and Shehbaz.

Dj Beauty and the Beatz said she never had a moment where she wanted to be a “normal teenager” because she constantly thought about her future and wanted to bring her friends to the top with her. However, she still makes time to be a teenager. She started homeschooling to help her balance DJ-ing and school. She also made time to hang out with her friends.

“I go to the mall with them, I play basketball, you know regular teenage activities,” she said. “Certain times when I have certain events I may invite friends to come to the event with me or I go to an event and face time a friend.”

Sierra has done a fine job of facing the challenges of being a young DJ in the industry. She has fought the image of being considered too young to know enough to be a successful DJ.

“People are looking down on me.” She said. “They think I don’t have enough experience or enough talent to get by, so I have to show them that I’m better than they think I am and that I really put work into what I do.”

Sierra said she is extremely excited for her Super Sweet 16 feature. Her birthday is May 21st, but she’ll be having her party earlier for the show. However, the episode will air on MTV closer to her birthday.

Sierra was asked about her specific birthday plans. She said it’s top secret and she can’t reveal much. However, she opened up about planning to do a set at her sweet 16 and about hiring three Djs.

The young DJ said she wants to have the infamous “car moment” like so many of the previous Super Sweet 16 guests. “I definitely want a car, but I’m not sure if it’s going to happen though.” she said. “There’s a lot that the show won’t tell me.”

Focusing on her future, Sierra talked about some of her goals to work with Djs such as Calvin Harris, Diplo and DJ Khaled. She also wants to work with artists such as Beyoncé and Rihanna. She hopes to continue to grow and learn more about the business.

“I just want to see myself getting more and more creative as I go on,” Sierra said. “Meeting more people that can help sharpen my knife. I want to start to produce. I want to get into fashion. I want to collaborate with a lot more artists and just sit in a room and be creative.”