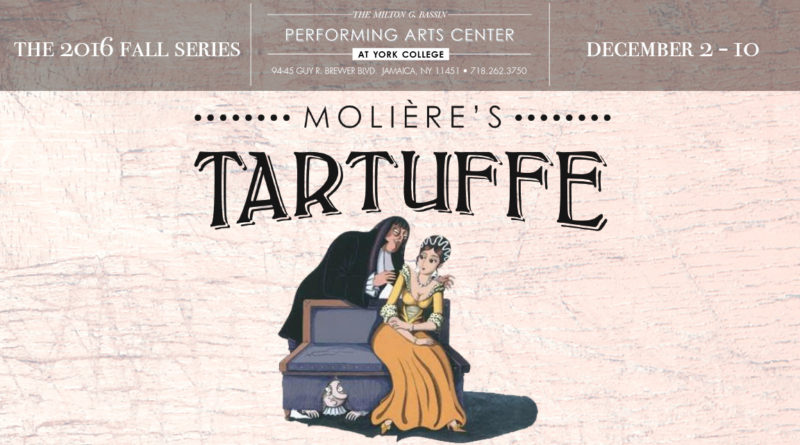 “It’s a funny play,” said Tom Marion, the director. “This play has never been done like this before. Hip-hop and modern day elements are added and it makes the play very special.”

As the small audience waited for the play to start a curious mixture of music played softly in the background. It is a mix of carnivalesque music that at random times switches to modern day beats. At first glance the set does not seem like much, with just a chest, two chairs and a table piled together in the middle.

The cast of ten actors gave their all to the performance. The lead roles were played by Alex Constantinides, an alumnus of York College, who plays Tartuffe,  Rilwan Alaka, a Theaters Arts major who plays the role of Orgon and Miya Bass who played the main role in Aida and who is now playing the role of Elmire.

The play keeps to the format of the original in speech and costumes but adds its own little spin using rap music and the names of contemporary political leaders.

When asked why he choose to incorporate 21st century ideas into a 17th century play, Marion replied, “I thought it would be a lot more fun to do it that way. There are some long speeches that are very rationalistic because [the play] is a part of the enlightenment. So, it is all about argument and the dialogue seemed very dry unless you rapped them.”

As the play starts and the backdrop is revealed the audience can see that while the cast may not have as much furniture, they skilfully work the stage using what they have to enrapture the audience. It becomes quickly clear that the simple-looking chest can hold a lot more than it seems.

The play starts off with the cast entering and setting up the stage. The performers dance to the carnival music with some of the cast juggling. Suddenly, the music cuts and a modern beat is played and the cast quickly switches to modern day dance moves.

Tartuffe is a play that discusses hypocrisy and deceit while putting in comedic elements to lessen the otherwise serious tones.

Constantinides, who plays Tartuffe, believes that the message of the play is ‘not everything goes your way all the time.’

“You can’t always get away with whatever you intend to do whether it is good or bad, it could blow up in your face,” said Constantinides.

For all its comedic aspects the play also touched on serious political aspects. At one point Jabaree Muhammad, who plays Orgon’s brother Cleante, raps about what a good family and man looks like and someone people should try to emulate. He then reaches into the chest unrolls a poster of the Obama family.

“Very clever show that played off of modern ideas especially politically and made the audience laugh,” said Anthony Medina, a Journalism major.

Wanting to liven up their performance a bit more the cast constantly breaks the fourth wall and engages with the audience. Often times characters would point out a member of the audience and ask them to do something. During some scenes the cast would walk through the rows.

“I thought the play was really funny, creative, and put a new kind of twist on something that was classical,” said Celine a Biology major who attended the play. “It was more interactive with the audience, you don’t often see the characters running into the audience and talking to them.”

The play was filled with surprises and jokes. In one part of the play as the cast runs around the theater trying to catch Tartuffe, the audience watches as Tartuffe walks over to a small chest and calmly steps inside and lowers himself inside disappearing startling the audience with the unexpected departure.

then you don’t know,” said Arline Tejada who played Marianne.