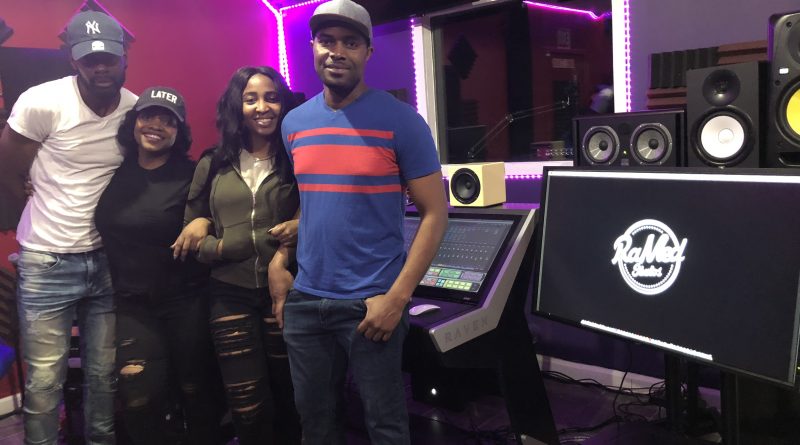 “We chose our location near York College because we are bringing the future to aspiring artists and entertainers,” says Reginald Myrie, who owns, operates and created the studio with his team.

Myrie is a professional music producer and engineer and felt passion from an early age. His love for music led him into recording studios where he first developed an interest in his future career.

“I remember the lights were dim, the buttons on the equipment were lit up and it just did something to my brain,” says Myrie.

Myrie was influenced by his time in the studio to buy his own equipment and started practicing on his craft whenever he could. He understood the importance of putting in work to gain experience and success. “I was self-taught, and I feel if you spend enough time in your interest, you eventually master it,” says Myrie.

The recording studio at RaMed Studios works with all genres and provides different block rates for various artists’ needs. The studio doesn’t just record the artists who have their own music but can also create custom instrumentals for artists. Artists can  also choose to work with producers, engineers and assistants during their sessions.

The studio uses industry standard equipment such as mixing monitors and UAD plugins for Mastering to achieve a professional sound. RaMed Studios hosts a comfortable environment where newcomers and experienced artists can both get valuable suggestions and feedback from professionals who want to mold greatness out of their potential.

“I have the best time with any artist I work with because I appreciate everyone’s talents,” says Myrie. “I don’t look at one person as better than another person. Everyone gets an equal platform to stand on and I learn from each experience.”

RaMed Studio is not just a recording studio but a multimedia studio for various creative projects including videography, photography, graphic design, make-up, and editing. It also includes a dance studio and a rehearsal space.  Maricia Morgan, Marland Morris, and Olivia Francois all work at RaMed Studios and are key members of Myrie’s team.

Maricia Morgan instructs vocal lessons and assists at RaMed studios helping with everything from audio to photography. She is a passionate recording artist and graduated with a bachelor’s degree in music education. Morgan understands the need for RaMed Studios to expand as musicians need much more than music to sell their craft.

“Most musicians also want the photo shoots and the videos,” said Morgan. “So, it was easy for come up with the concept of having everything under one roof. We offer our clients a complete package, so they don’t have to search anywhere else.”

Olivia Francois is a photographer and videographer for RaMed Studios and does graphic design. She agrees on the versatility of RaMed Studios and has watched them expand from a platform for artists to even companies reaching out to the studio.

“The studio brings awareness to companies and we not only help artists develop their artist page and brand, but we also help companies expand and bring in more revenue,” says Francois.

Clients can join a membership for the photo studio or choose from their hourly rates. When shooting photos with a client, Francois makes sure to work with the client and put their individuality first. She represents the diversity in each client and showcases that through her pictures.

“An R&B artist may not want their photo taken in a same way as a reggae artist or a pop artist. It all varies. We cater to your vision and the look you want,” says Francois.

Marland Morris is a video director, musician, and graphic designer for RaMed studios. He believes it’s not just quantity, but quality makes the RaMed Studios brand what it is. “We have quality audio recording, video recording, graphic design, and photography and we know to keep that quality consistently high.”

Though RaMed Studios recently the team has already been thinking about the future. “We just started up like a newborn baby, but we are looking to build an empire. This is the dynasty,” says Morgan.  “We’re going to have more locations to help more universities and schools. We want to expand to show more people how to become the greatness they are.”

The team at RaMed is focused on enhancing originality and letting artists tell their own story. They provide the tools and knowledge to achieve the vision as a full package. Myrie has a motto for his team and his clients, “RaMed is the definition of Excellence. Excellence is what we do.”

Rates for the studio can be found at http://www.ramedstudios.com.