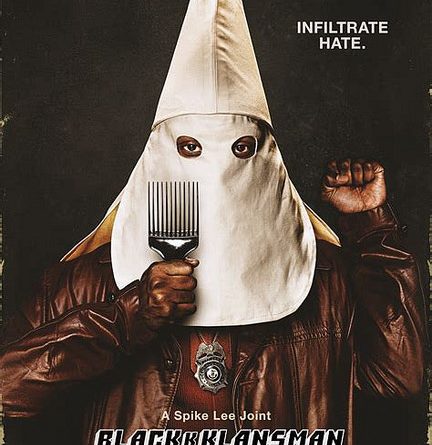 BLACKkKLANSMAN is based on a memoir by Ron Stalworth and African American police officer who went undercover in the Ku Klux Klan. Photo credit: WolfGang.

Last month, BlacKkKlansman hit theaters. It was directed by Spike Lee and written by him, Charlie Wachtel, David Rabinowitz, and Kevin Willmott. The film was based on the memoir Black Klansman by Ron Stallworth.

In this retelling of Stallworth’s true story we follow Ron Stallworth, the only black cop in Colorado Springs’ Police Department in the 70s, as he tries to infiltrate the Ku Klux Klan.

The film is fast-paced and shows Stallworth getting the job as a policeman, being forced into the evidence room for being a black cop, and then moving up the ranks with his crazy idea of infiltrating the Ku Klux Klan.

So, how does a black cop infiltrate the Ku Klux Klan exactly? Well, he uses the phone to do his part in talking to them to set himself up to go undercover, and then uses a white cop (Adam Driver) to help him meet up with the klan physically and dig up dirt from inside the organization. Sounds like a weird combination, but works perfectly.

Something interesting the film does is play with the idea that voices can have a race. In the film David Duke (Topher Grace) is convinced that Ron Stallworth is the purest white American because of the way he talks, unbeknownst to him Ron Stallworth is the only black cop in the Colorado Springs’ Police Department. The film plays with this idea over and over on the scenes where Ron Stallworth must take a phone call or make one to the Ku Klux Klan to become a member, or go over details of a meeting with them. Since Adam Driver’s character does the physical part of meeting with the Klan, David Duke never realises what’s going on until the very end.

The movie is hilarious, but the jokes are thought provoking. Race is an important issue in the film that’s explored and it’s all very relevant to what’s going on today.

Spike Lee does a great job of giving us lots of symbols and things to think about, but you can’t get it all with one watch. You have to see this film multiple times to really understand some of the images Lee gives us, and to pick up on things that you will definitely not see the first time.

For example, in one scene a huge group of Klansmen are watching The Birth of a Nation, a film which portrays black men as sexually aggressive and unintelligent while portraying the Ku Klux Klan as heroic. The Klan in that scene get fired up and Lee is showing us the power of films, and how images specifically can make an impact on people. He also shows us in that scene that that film reenergized the Klan at one point in history and breathed new life into them. Of course there’s so much more to unpack, but that’s just a small taste of things.

The film feels fresh and actually does feel really relevant, even though it’s set in the 70s. Lee also gives us his signature dolly shot towards the end of the movie, which is one of the shots I was waiting for in the theater the whole time. It’s a classic Spike Lee move, and can be seen in all the films he’s done.

Topher Grace as David Duke is perfect. His character is kind of oblivious to everything around him. He’s ignorant, and Stallworth takes advantage of that by befriending him to get into the organization. Throughout the film, their relationship develops quickly and David Duke ends up loving Stallworth (until he finds out who Stallworth really is).

At the end of the film, Lee closes it all out by including footage from the 2017 Unite The Right Rally, David Duke giving a speech, counter-protesters, the car attack which killed Heather Heyer, and Trump’s comments about the rally. He also memorializes the car attack victim at the end. Lee gives us all of this stuff to show that these types of people are still alive today, and that everything in the film is still relevant. I guess I could say that was my only complaint about the film, that Lee pushed the idea that the things that were happening in the film are still relevant today. He didn’t have to push that idea so hard since we can all see that from the dialogue coming from the characters and the story or images themselves, but other than that the film is great.

Everyone should see this movie. Not only it is powerful and relevant, but it’s also hilarious, action-packed, and overall entertaining.