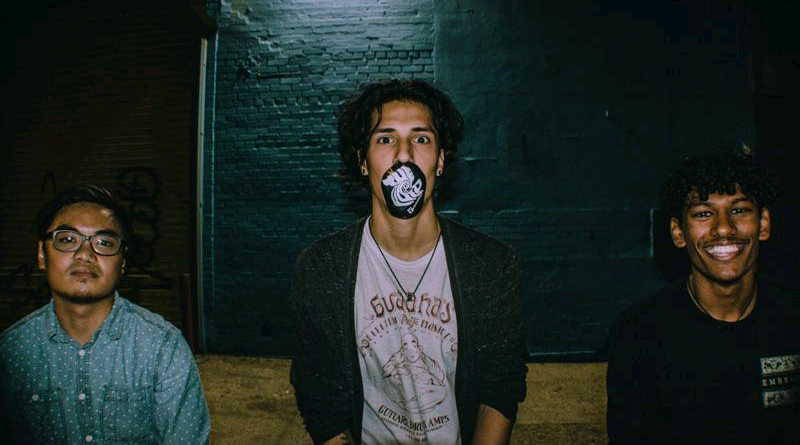 The laughter dies down as the members of The Void, sitting around a metal table in York College’s atrium, look at each other. “We are almost like a family,” says Leon Naraine looking around at his other nodding bandmates. “As cheesy as it sounds we are family.”

Narine is the guitarist for the Queens born and York College sprung band called The Void, a three member band consisting of Naraine, Alarick Imperial their drummer and Mark Arias their lead vocalist and bassist.

The multiple genre band was formed two years ago.

Pandora’s Box (PB): How did you guys become a band?

Leon Naraine: We all met here. I was a freshman and my first class was music theory with Mark Adams and that’s where I met Mark.  He just sat really close to me and we just bonded. We found out that we both play guitar and we just decided to jam. We weren’t in bands at the time so it was really just for fun and we just came up with some ideas and covered some songs.

Mark Arias: We just wanted to do it (form a band) and see how it goes.

Leon: Me and Mark made the band but we didn’t know Alarick at the time. We played our first show in November and then in March we met Alarick at a music club meeting. We talked for a bit and found out that we all like the same bands and then he hit us up and asked us if he could jam with us. He just complimented so much to our sound. We had met so many musicians along the way but he was the only one we really had fun with.

Mark: I remember the day I told Leon “Hey Leon so we definitely got to put him in our band but if he says no…  he’s still in the band.”

Leon: We were friends first. Everybody says that in a band you should be musicians first and then friends but it was the opposite for us.  I mean the first time all three of us jammed we went out to eat right before.

Mark: It is constant learning from all three of us. Learning how each other works and our personalities. We are not just friends we treat each other like brothers.

PB: So what musical genre would you categorize your music as?

Leon: We never gave ourselves a genre. The fifth song we wrote was reggae. We could say that we are a rock band but we play a lot more than just rock.

Alarick: whatever sounds good to our ears.

Mark: For me I don’t like to stay in one genre because I feel like it gets like boring. At the end of the day music is music it has 12 notes and those 12 notes will be repeatedly used so it’s like why not go into something else and maybe come out with another idea out of it.

Leon: You don’t want to limit yourself. Like Mark said the fact that it’s only 12 notes shows that every genre is connected somehow so why not just love all of them.

Alarick Imperial: Sometimes you get different ideas from listening to more than one song too.

PB:How did you guys come up with the name of your band? Is there a meaning behind the name?

Mark: The origin of our name is like a game of telephone.

Alarick: They just put me up on the name. I asked them though and I was like “So what’s the name of the band?” They were both laughing and just went like The Void and I was like “okay… is that final”

Mark:The origins are that I’m a fan of  Psychedelic Music and we have songs that have some psychedelic sounds. So I wanted the name to fit the criteria of telling the people that we are different and that we are something that you are going to listen to and just find more ideas and find more songs from there so it’s like a void it is endless. Endless possibilities. The idea just stuck I tried different names but people had caught onto it.

PB: What are some of your musical inspirations? What artist have inspired you?

Mark: I listened to a lot of spanish music and then I got put onto rock music. I remember one of the first rock songs I listened to was Smells Like Teen Spirit by Nirvana. Then I started to listen to Black Sabbath, Led Zepplin and some death metal to. I really like reggae too. I listen to all types of music.

Leon: I grew up taking piano lessons when I was really young. Then I started listening to punk music like Blink 182 and Green Day. That was really my introduction to music. I got into it and started to play the drums. I started to play guitar when I was like 14 or 15 and then I started to get into John Mayer and Jimi Hendrix. Then after that I started to listen to Nirvana,  Foo Fighters and The Police. I really like Motown music. Now I listen to a more pop punk like The Story So Far, Neck Deep, A fighting Chance which is a local band from Long Island.

Mark: I write the lyrics.
Leon: Mark mostly takes care of that. We give him insights. To be honest the way most of our songs start I come up with a guitar rift that I feel sounds musical and then I jam it out with Mark who then starts writing lyrics or bass line. Me and Alarick always work really well together too with just guitars and drums. Once we have an idea and Alarick gets behind the drums that’s when the song starts to take form.

PB: How do your practices go?

Alarick: Well, we have a group chat and we let each other know when we are free.

Mark: We always practice at Block 6 Studios in Maspeth that’s mostly where we practice at but we have jammed in Astoria SoundWorks, Level Up Studios and even practiced here at York.

Alarick: There was one practice that we did where we created three new songs in two hours.

PB: What’s something that makes The Void unique? Why do you think your fans like your music?

Leon: I think you’d have to ask our fans that, but I think we have that surprise factor. Usually when we say we have a new song coming out they don’t know what to expect because our songs are very different, and we have an experimental quality to our music while at the same time being very catchy. We have intensity matched with catchiness.

Currently The Void is working on their first EP and are slated to soon drop their first ever music video to their Youtube channel. Though they are currently not actively doing gigs due to preparation for their EP they are going to be playing in Brooklyn some time in late October.