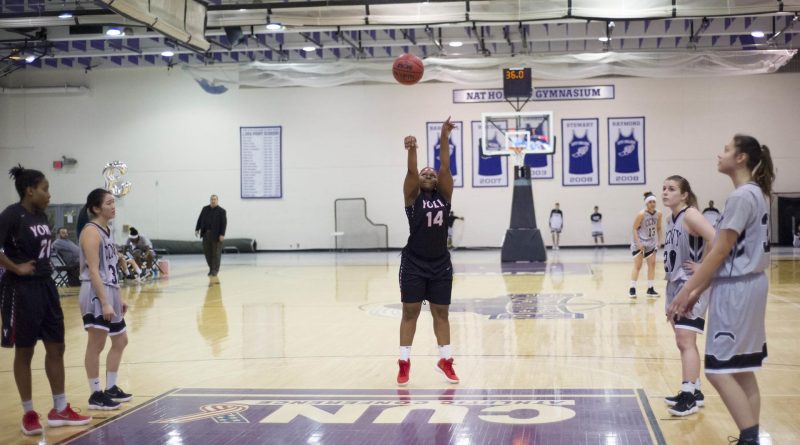 The women’s basketball season is underway with a plethora of road games before their first home game on December 7 against Lehman College. Before that matchup, there are two important conference games that will be crucial for the team to get off to a great start in the CUNYAC.

For a team that features a roster that has more underclassmen than upperclassmen, this experience will be new to most players. Fortunately, there are just enough players with some experience that the team can lean on. There is also one player ready to lead the team to victory each and every time.

Sheahna Roscher, Journalism major and Communications minor, is ready to take on the leadership role and do whatever it takes to lead the team to victory. Roscher understands the importance of the role she possesses.

She stresses why she pays so much attention on setting a high standard so the younger players on the team can follow that same blueprint in their upcoming years.

“I wasn’t in that leadership role for the past three years,” she said. “So now I’m the only senior and most of the team is made up of freshmen. I am the example of what you can be four years from now. My standard has to be high so that theirs can be higher than mine.”

For those that aren’t familiar with  Roscher, she is a Bronx native that has hopes of becoming a sports broadcaster in the future. Her friends call her “She She∫. You will most likely see her around campus with tons of energy and a huge smile on her face.

“I’m a fun person with good energy,” Roscher said. “I like to party, but not a lot. I like to go out and have fun. I do have those moments where I like to be by myself to read a book or read something on my phone.”

Roscher enjoys listening to hip hop and R&amp;B. She describes herself as a old soul because of her interest in older R&B music along with selections from hip hop’s golden age. Ne-Yo, Beyonce, and Rihanna are some of her favorites from R&B.

On the hip hop side, Tupac is her favorite. Snoop Dogg, Ice Cube, Biggie, and Dr. Dre can be found being replayed on her playlist as well.

Every young athlete has their inspirations in the pros that they look up to on and off the court. Not only does Roscher have her favorites in the NBA, but she also has idols in the WNBA. Maya Moore is someone she looks up to.

She notes her toughness and competitiveness on display each time she touches the court. Roscher appreciates that because of the negative notion that women can’t compete on the floor like men do.

“I love the strength and fight she plays with,” she said. “She hustles and she’s such a competitor and I love that about her. People always feel like women can’t do what men do. Just because the WNBA doesn’t get the same exposure as the NBA doesn’t mean the women aren’t doing what the men are doing. The women must work ten times harder just to get recognized. I just feel they deserve more respect.”

Balancing being a student athlete is a challenge experienced only by those willing to take that opportunity. The senior ballplayer noted there has been countless lessons learned along the college journey.

She said during her freshman year, joining the team wasn’t even an option. Fast forward to now, Roscher appreciates the lessons learned from being a student athlete.

When asked what she would tell her freshman self now after what she’s learned from a couple years at York, she mentioned invaluable lessons learned along the way.

“Overall as a student don’t allow sports to distract you from your main goal, which is to get your degree,” she said. “Always remember you’re a student first. For sports, I would tell my freshman self to be more prepared. Mentally, I was still a kid coming out of high school you really have priorities. Your mentality has to be strong so it will guide you to where you need to be.”