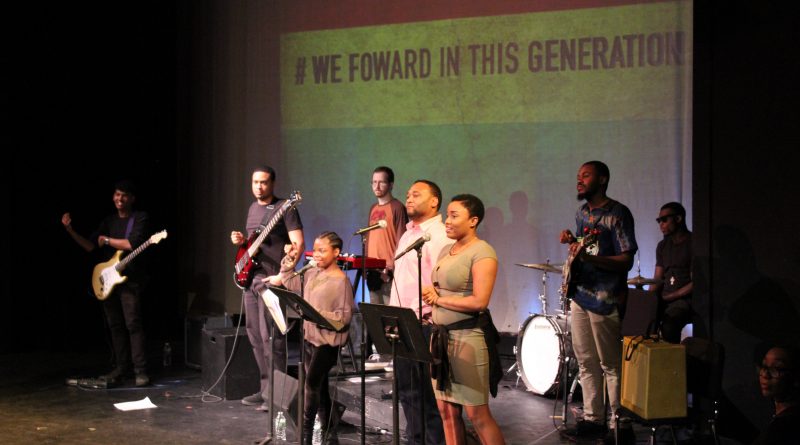 The detailed tattoo of Bob Marley on the arm of Theater Arts major Ashlee Alexander is just a hint at how deeply she feels about the legendary performer.

While the pressure of choosing an independent research topic lingers over many Speech Communications and Theater Arts majors at York, for Alexander the choice was obvious: use Marley’s work as a window into all the current racial turmoil in the U.S. and around the world.

All majors need to participate in a play, recital or some form of performance in order to graduate. Alexander, a 24-year-old graduating senior, presented her work on Thursday, May 10 at 7 p.m. to a small but enthusiastic audience.

Alexander’s show was titled We Struggle in This Nation, and combined her skills in acting, singing and production in an hourlong multi-media presentation at the Little Theater. The over-arching theme of this project combined musical performances and interviews with Marley and the relation to the current struggle with civil rights in America.

“I’m enthusiastic about Bob Marley,” said Alexander before revealing. “I listened to one of his songs recently and it connected to what’s been going on recently.”

Marley the world-renowned Jamaican reggae singer, writer, and producer, sold 20 million records and became a symbol for free rights for all cultures. Alexander made sure Marley started the event by playing an interview of him on Like it Is in 1980. In the interview, he discussed his childhood, philosophy, and the foundation of his lifelong passion for reggae music.

Accompanying the video segments was live music performed by a mix of York students, faculty and alumni on backup vocals, drums, bass, electric piano, and guitar.  A few of the band members held their own senior recitals and helped other students in their performances.

Although Alexander’s small stature may fool some, her powerful voice engulfed the room and captured the attention of audience members.

Some of the infamous Bob Marley hits played live were I Shot The Sheriff, No Woman No Cry, Exodus, Redemption Song and Get Up Stand Up.

The video clips featured history vignettes about the characters represented. One depicted Nat Turner’s Rebellion, one of the largest revolts against slave owners in Virginia. Another portrayed King’s march from Selma, Ala. to Washington, D.C. in 1965. Former President Obama’s inauguration also made its way in the event as reminder of the changes made over the years and efforts to continue fighting for civil rights among the black community.

“I loved it,” said Eunique Doran, a Communications Technology major at York. “She talked about black lives and expressed it through the Bob Marley. It goes to show that history repeats.”

Among those in the crowd were Alexander’s father Neil, who began his daughter’s exposure to Marley and showed his support throughout the event.

“Everything was good,” said her father. “She made me proud. Even with all of the obstacles, she was able to do this. Yes, I’m very proud.”

Ashlee won’t know of her grade until the end of the semester, but she’s confident her grade is an A.