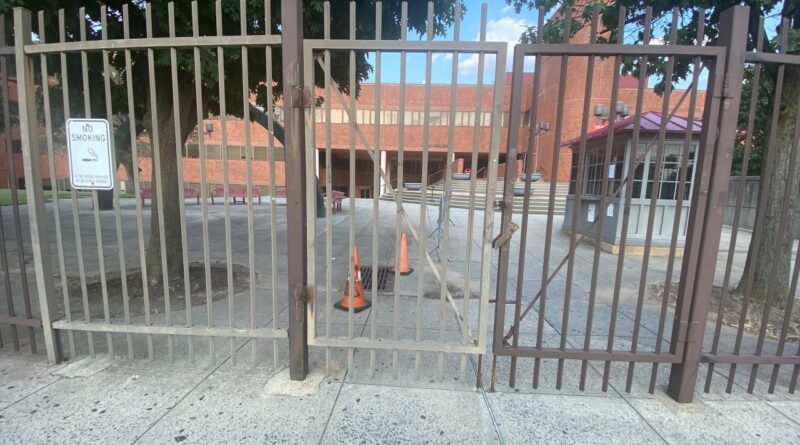 The 160 Street entrance at the back of the Academic Core Building, shuttered around 5 PM on a Monday. No signs are posted at the front of the gate or the Public Safety booth letting people know the operating hours of the entrance.

When York students, faculty and staff reach Jamaica, Queens to enter the Academic Core building where most activities on campus take place, many come by public transportation. When they do so, several of them enter through the closest entrance to campus by walking underneath the railroad tracks, past the Daycare Center, then scurrying across 160 Street to the back entrance of the Academic Core.

Although this may be a popular entry and exit for Cardinals using the subway and bus lines that stop near the main building, it has been closed down sporadically during random times of the day since the beginning of the semester, leaving many from the college frustrated and inconvenienced.

“The gate closing is very annoying, especially as a freshman because it’s already hard to navigate the campus and that’s just another thing to stop you,” said York English major Joseph Olman, who was on his way to Chipotle for lunch until he realized the back entrance gate was shuttered– blocking a straight shot walk to the restaurant on the corner of Jamaica Ave. and 160th St.

“Going around the school is a waste of time like what if I’m late and rushing to class and I’m expecting the entrance to be open but then I have to go around the whole school,” said freshman nursing major DeVaunya Bady, through the YC Cardinal App. “The school could put a post on this app to let us know when it’ll be open/closed just like how they post everything else.”

Many from the York community share the same sentiment as Bady about York College communicating entrance hours. To date, there are no signs or any form of communication displaying operational hours of the 160 St entrance. In addition to the random nature of the gate closing, temperature testing has also been a randomly administered requirement at all three entrances (including Guy Brewer Boulevard and Liberty Avenue) since the fall semester began.

Pandora’s Box administered a survey of 35 participants composed of York students, faculty and staff, with a set of ten questions related to the use of the 160th Street entrance. According to the survey, 78 percent of participants said the entrance was closed when they tried accessing it at any point of the day. In a question that asked participants how often they have seen it open since the academic year began, almost half chose “Rarely” as an option over “Always”, “Sometimes” and “Never.”

Most survey takers said that the 160 Street gate is closest to the mode of transportation they use to get to and leave campus, with 89 percent answering that this is the case for them. When asked how much additional time it takes for them to reach their destinations on campus when the entrance is closed, the average answer was between five and ten minutes. When asked about the extra time it takes to leave the school to reach their destination, the average answer’s range increased to between five and 20 minutes. Over 80 percent of respondents claimed that they have been late to their destinations within the building due to the entrance being closed.

“We want the opportunity for students to be able to travel freely among the campus in the most convenient way possible and we know that time management is a thing but things happen,” said senior, Shaquilah Simmonds, an accounting major. “Using an alternate entrance can run you maybe seven to ten minutes. We’re in a highly-populated area so walking through to go to different entrances, especially for those freshmen or students who transferred to York, they might not be aware of the means to get on to campus.”

Simmonds also brought up the consideration of those who are disabled possibly having a harder time accessing the building when entrances such as the one on 160 Street are closed. Simmonds said she thinks the college and Public Safety, the agency responsible for staffing the entrance, should look into fully reopening the entrance to create better accessibility for everyone at York. According to the survey, when asked about a possible solution if the gate cannot be reopened during all school hours, most respondents said a notification as to when it will be closed or opened would suffice, either via a sign at the entrance, email notifications or text messages.

When Pandora’s Box requested an interview with York’s Assistant College Security Director, Carlos Suarez, he declined to comment on any questions regarding the survey results and concerns related to the 160 St entrance. In response to a request for comment on the issue from President Berenecea Eanes, she declined to comment through an email from a  spokeswoman from the college’s Office of Communications.

“Honestly I can understand the president not having any time to respond because she most likely has more important things to do than respond to one of the exits just randomly being closed,” said senior Michael Jude Delos Santos, an Information Systems major. “But the fact that the Public Safety is just ignoring us makes absolutely no sense because it’s literally in the job title ‘Public Safety’. If they can’t respond to why a door is being randomly locked up throughout the day what are they actually doing?”

When asked what he thought about the statement from the college spokesperson, Delos Santos replied, “I feel like this statement makes no sense because she’s the president, it’s her job to be fully aware on what’s going on within our school. What kind of president would she be if she can’t even respond to a simple exit being closed at random points throughout the day which is extremely inconvenient to a lot of the current students.”

Delos Santos said that he hopes for some sort of resolve pertaining to the entrance closure, given the nature of the situation.

“The fact that this is even an issue makes absolutely no sense,” said Delos Santos. “They can find time to throw a Halloween ‘party’ and force the students to sit down and watch the president give some nonsense presentation on how great the school is becoming with the new lecture hall and a more diverse student base. But she can’t take two seconds out of her day to respond on why a gate is locked up?”

Update (11/11/2021):  On Nov. 4, one day after this story was posted, two signs were placed above the doors leading into the building from 160 St. indicating that the gate is open from 7:30 AM to 10:30 PM. On Nov. 10, a statement was issued via York News that due to popular demand, the entrance would remain open from 7:30 AM to 10:30 PM. The statement notes that the random closures were due to “current staffing shortages and the reduced population density on campus.” It also states that before the decision was made to reopen the gate during all operating hours, the entrance was only operational during “daytime” hours, contrary to witness statements in the Pandora’s Box survey, and time-stamped pictures captured by Pandora’s Box itself.