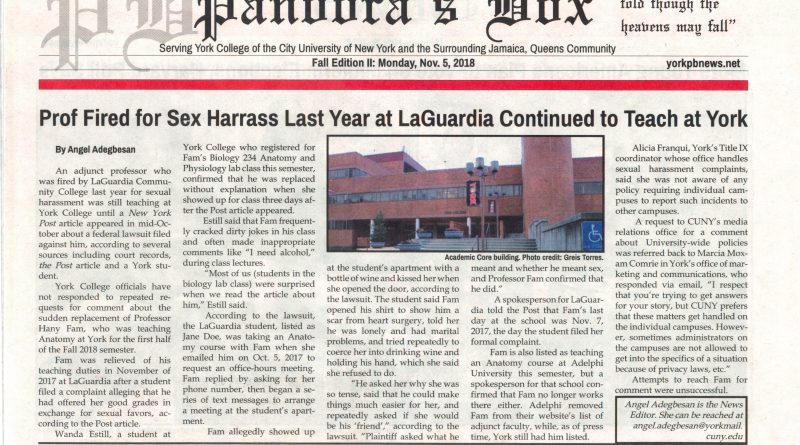 There is an overarching communication and policy issue at the City University of New York. Based on Pandora’s Box’s front-page, the code of practice wasn’t followed accordingly when York College hired the lab technician who got arrested last January for selling cocaine on campus, and there wasn’t any communication between York’s and LaGuardia’s Title IX offices to let the other school know that an adjunct professor was found to be guilty of sexual misconduct. According to the lab tech article, Timothy Hawkins had already served time in prison for the same crime a decade prior to his hiring at York. The CUNY code of practice clearly says that every new and current employee needs to have a background check conducted on them, but as Pandora’s Box reported this wasn’t apparently the case for the lab tech and is most likely the case for many CUNY employees.

But the thing that is more concerning about the two stories is how these issues seem to transcend York College. The professor who was fired from LaGuardia for sexual harassment also taught at York. Once LaGuardia fired him, he continued to teach at York college. According to Alicia Franqui, the Title IX coordinator at York College, there isn’t any policy in place that says CUNY campuses should alert each other when a professor who is employed in more than one CUNY school is fired for sexual harassment. The most important issue is that York College won’t allow you to get more details about the background of a person. Human Resources says that the above issues fall under personnel matters and they are not allowed to discuss it with the public.

But this should be changed because such matters are public records anyway, and it doesn’t make the school look good when they are trying to hide the fact that they have previous convicts and perverts walking around and teaching at York. The clear message that I got from Pandora’s Box’s front page is that CUNY employs and/or retains people who shouldn’t be teaching or in a place where there are many vulnerable students. As a CUNY student I can only wonder if CUNY really cares about the overall safety of its students and staff when they hire previous convicts and potential sexual predators. CUNY should be more transparent instead of trying to hide such crucial news to the student body for the sake of attracting more students.