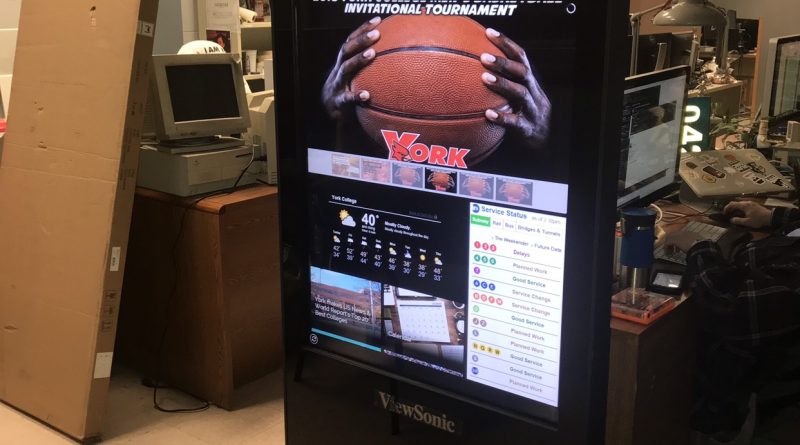 The digital kiosks that will be placed in the Academic Core building in 2019. Photo Credit: Claudio Lindow

Next year, York College is planning to introduce a kiosk program to the college body courtesy of a proposal by the Student Government Association(SGA). The kiosk program is currently being worked on by the IT Department, the College’s Technology Fee Committee, Buildings and Grounds, among many other committees.

“We are definitely pursuing this because student government supported the funding of the software,” said Peter Tighe, the chief information officer of the IT department. “We are actively pursuing the digital mapping. The idea is that it would be a multifunctional kiosk.”

According to Tighe, the York’s kiosk program would be a free standing device similar to the Metropolitan Transportation Authority (MTA) kiosk program that shows the arrival and departure of trains and buses.

“We’re going to have a digital map of the campus on it so if you need to find a room, you can input the room and it will say ok you’re starting here, go up the stairs, turn left and/ go right,” Tighe said. “So we incorporated that and we’re working on that now.”

Tighe said in an interview that about half of the intended devices are already available on campus to put together the kiosk but he did not want too much hardware before the kiosk was ready to be installed.

Tighe also said that the kiosk would have some applications other than a digital map of the campus, such as the weather and time.

“My staff looks at these kiosks and works on them,” Tighe said.  “I want to try to break them up into some sort of panels so we have different tiles or windows that offer different things. We’re still working through some of the details of it but we’re making progress.”

The kiosks would also serve as a technologically visible opportunity to make York more engaging and welcoming.

“I know some students don’t feel like the campus was particularly welcoming and I believe that this kiosks can do that too,” Tighe said. “It can blast like a ‘Welcome to York’ every so often and ‘Find Your Way’ like if you’re looking for the financial aid office, you can ask a public safety officer or you can type in ‘financial aid office’ and it will give you directions.”

According to Tighe, the development effort for the kiosk has already kicked in.

“We’re working right now to try to get the software agreements settled for the company for the software for the digital map,” said Tighe. “It’s workload to try to get all of the rooms mapped from a particular point. Each kiosk would be understood to have it’s own starting point. We’re still working through some of the details of it but we’re making progress.”

The kiosk program comes as a result of an Request For Proposals program which allows students and faculty to bring proposals to the Tech Fee Committee. The RFP process is an initiative of the CUNY Strategic Technology Initiative which takes up a portion of the Tech Fee budget.

“We want to promote the idea of the college being committed to and improving customer service to students,” Tighe said. “We want to let students know that we’re here for you and we want to hear from you. We want you to have a positive time here.”