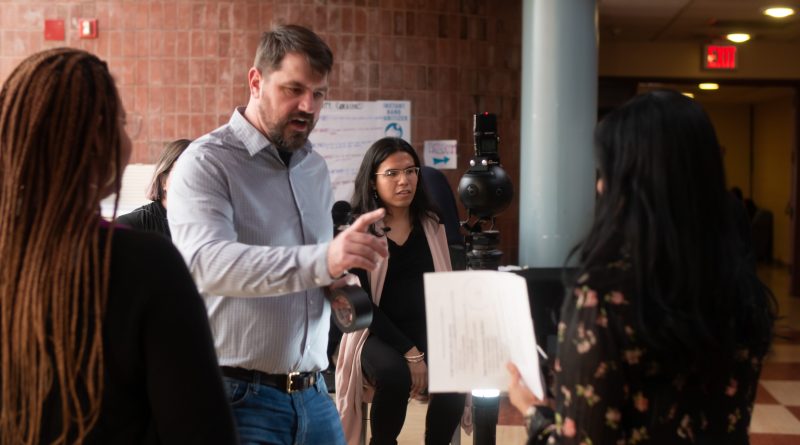 Daniel Phelps instructing a group of students while setting up recording devices at the Symposium. Photo Credit: Adisa Sobers.

The LGBTQ symposium hosted by Student Development on Nov. 29 was recorded using a virtual reality camera.

“What’s hot right now, and what’s really emerging, and becoming really popular in the consumer spaces is virtual reality,” said Associate Professor of Performing and Fine Arts Daniel Phelps. “So I’ve decided to kind of capitalize on that recording medium and experiment and use to its full extent by recording a lot of people at once.”

Phelps organized the symposium in collaboration with the Queens Public Library, and the Wagner Archives at LaGuardia Community College.

“I am conducting a documentary series entitled The Future American Retrospective, and it falls along the same lines as what the Queens Memory Project at the Queens Public Library is doing,” he said.

The event brought together different generations to discuss their advocacy for rights and gender fluidity. It featured two panels, and a keynote address by Pauline Park, the chair of the New York association for Gender rights. The event took place in the 3H atrium.

Phelps said that the circle formed by the panelists made the discussions perfect  for recording virtual reality footage.

Back at the atrium, some of the panelists thought the use of VR technology in the event was an innovative touch.

Melissa Sklarz, a recent candidate for the New York State assembly, was one of the panelists. She said she had never seen the technology.

“Who knows really how far this technology can be used,” said Sklarz. “It seems strange and unusual today, but 20 years from now the 8th generation of this will be amazing and profound.”

Lakshman Kalasapudi, a student who also took part in the event said he was blown away by the experience.

“It was unlike something I’ve ever done before, and I’m very excited to see how it will come out, and the different ways that people can use it as a research and learning tool,” said Kalasapudi.

The 360 video will be available for viewing in a virtual reality group installation that multiple people can experience at once. A specific date, however, has not been announced yet.