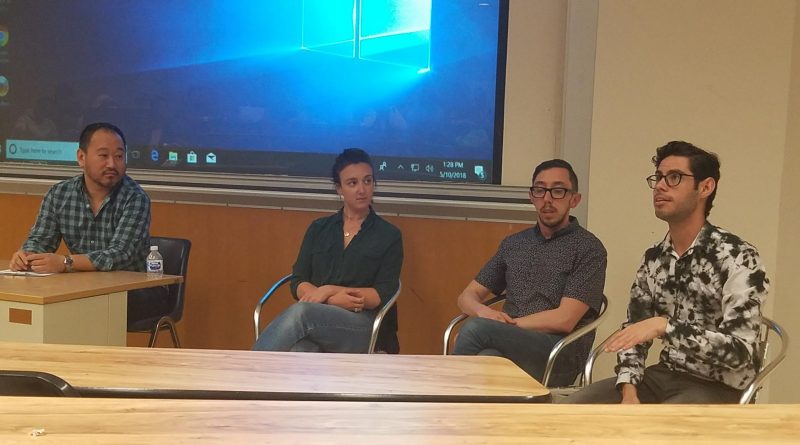 The series Life in the Lens presented a panel discussion on ‘Careers in the Media’ where three New York City-based journalists talked about online and video journalism, and film production. The event was sponsored by the Performing and Fine Arts Department and the York College Auxiliary Enterprises.

Guest speakers Dan Avery, Jesus Hernandez and Lea Khayata spoke at the panel about their experiences in starting and working in the media industry.

Born in Paris and growing up in Lebanon, video journalist and filmmaker Lea Khayata grew up with a passion for writing, which inspired her later in life to make a career out of it.

“I knew I wanted to be a journalist from early on because I liked to write and thought it would be easier to write articles,” Khayata said. She became involved in multiple mediums such as print, radio and video. Khayata has worked for BBC, Allure, The New Yorker, and Bustle among others and is the founder of Pushpin Films, a Brooklyn-based production company.

Dan Avery, editor of NewNowNext.com, a website that focuses on pop culture and LGBTQ+ news, shared how he got into journalism. “I actually came late to journalism,” said Avery. Like Khayata, he shared a love for writing but was unsure of how to put it to good use.

“I did small things like movie reviews and realized that I loved it, so I went back to school to get my Master’s in Journalism,” said Avery.

Cuban-born Film Producer and Director Jesus Hernandez spoke about living in Cuba and the difficulties he had to overcome to get to his position. Originally he wanted to study Sociology, but found heavy opposition from the Cuban government.

“I wasn’t sure of what path I wanted to take, so I studied Film and TV to find my path,” Hernandez said.

He founded Bach Media, a company that specializes in Cuban film production inside and outside the island.

The panelists had a chance to display their work. Khayata’s video I Am the Revolution showcased women’s struggle in Syria and Afghanistan regarding education and the treatment of women and young girls. Avery showcased his work on his website, NewNowNext.com, focusing on issues in the LGBTQ+ community. Hernandez showcased an indie film he helped make on people living in a psychiatric hospital.

The focus shifted to taking care of one’s self and being wary in certain situations. “One thing is to not be abused by people who do not have the best intentions,” said Khayata.

The panel opened the floor for comments and suggestions from the audience and asked them to introduce themselves. Many of the students were media majors and received advice by the panel on how to build themselves. The panelists stressed the importance of getting into new experiences and knowing people.

“Look for what you want to do and learn new skills,” said Hernandez. Avery advised the audience about getting enough experience to build resumes.

“One thing I took from this was to never give up, don’t underestimate yourself and build your skills,” said Mohammed Alnefaie, 26, a Communications Technology major. He said that the panel discussion helped him understand how he could sharpen his skills and further his education.

Ashley Davis, 24, also a Communications Technology major, thought the meeting went well and said she plans on taking their advice. “Even though I already took an internship and seeing that they all say that is important, I will apply to do more things and get more experience,” said Davis.