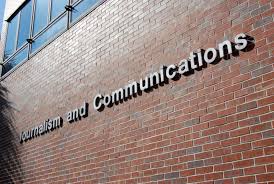 Feemster, who stayed in New York while Hurricane Irma passed through Florida, explained the advantages of being a fervent student reporter and the expected features of a college newspaper.

“College Journalism can be really powerful,” said Feemster. “And that’s the reason that administrations don’t like it. Students have the power of the press. And if you use it, you are protected by the First Amendment, much more so than your advisors.”

Feemster was fired as a newspaper advisor from Northwest College in Powell, WY.,  in 2010. He taught print journalism and advised the Northwest Trail, the college newspaper for two academic years. He said he was fired because he and the students at the newspaper broke a news story that projected a negative image of the college.

The reporters at Northwest Trail broke a news story called the Mormon Letter in 2010 after Feemster was fired. The story was about the president of the college illegally recruiting Mormon students to the college. The story earned the reporters the Student Press Law Center’s College Press Freedom Award, the biggest college journalism award.

Feemster who advocates upholding journalistic values said, “I lost my job but I gained something greater,” said Feemster. “What I gained was knowledge of how student journalism can change a community and how it can change students’ lives. That’s the reason to do this.”

Feemster, 62, grew up in Minneapolis, MN., and he studied philosophy first before he found his passion in journalism. He attended Columbia University Graduate School in 1991 and graduated in 1992. His first job out of graduate school was as an intern at Newsday, a newspaper in Long Island, and then as a freelancer at the New York Times, The Associated Press and The New York Post.

Feemster stated in the press conference that his first teaching job was in the CUNY system. He was an adjunct at Hunter College where he taught basic reporting and investigative reporting. Feemster moved from Hunter College to Brooklyn College and subsequently City College.

“I think CUNY is probably in a better position in many ways because it’s a bigger institution,” he said. “When a college journalist in CUNY breaks a big story about the CUNY system, it will not go under right away.”

When asked what barriers college newspapers encounter, Feemster said, “There are definite ethical limits to what we can do as journalists. But as long as I am writing the truth, as far as I’m concerned, there are very, very few barriers.”

He further explained that being a reporter changes lives as it is empowering. It energizes reporters to ask questions, write answers and publish stories for the benefit of its readers while consequently changing their community.

Feemster emphasized the basic things to do with a college newspaper. These involve reporting the best story you can find, following the leads on a story without fear or favor, reporting whoever is doing the wrong thing and is the cause of a problem.

In an article seven years ago in Inside Higher Ed, Feemster wrote, “If a college can’t allow a student newspaper to operate under the same rules as the professional press, it should shut down the paper and let the students learn journalism elsewhere.”