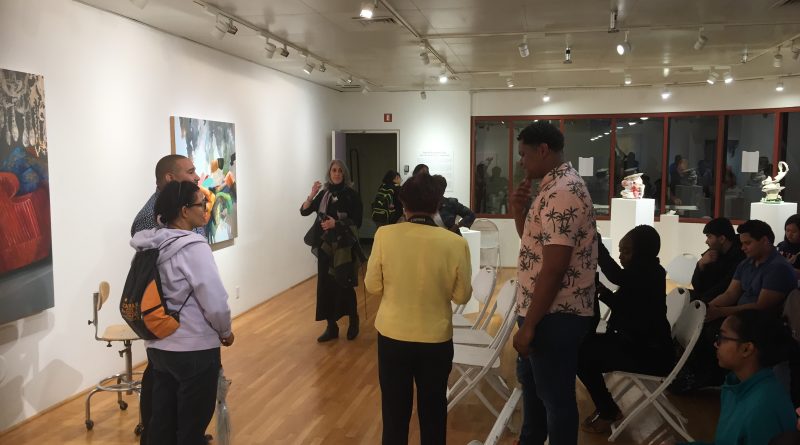 New York City artist, David Antonio Cruz, had some of his artwork featured in the York College Fine Arts Gallery from Sept. 13 to Oct. 12.

Cruz, a former adjunct of the college, came back to York on Oct. 11 for an artist talk with students and faculty, where he explained the symbolism behind some of his newer works like Returnofthedirtyboys, and Howtoorderchocolatecake.

A majority of his work deals with the theme of breaking through the barriers of gender and race, whilst also speaking on queer and gay culture within the black and latinx community.

Returnofthedirtyboys explores gender, queerness, race, and spaces. He also speaks on the lack of correspondence between the human body and societal structures, as well as the power of the male to male gaze.

“It’s truly going back into thinking about sexuality, thinking about brownness, blackness, and addressing how we look at the male body in relationship to society and history,” said Cruz.

His use of colors really emphasize this idea because his colors are purposefully vibrant in some places and neutral in other places.

For example in one of the paintings from the series, a man has a greyed out body and very colorful head. This is meant to represent a fracture within society and how people who identify as queer or gay, are not seen as conventional or normal. The fractures are meant to look visually correct as the bodies on the men are normal, but it all looks slightly off because of the use of the grey color in the bodies throughout the paintings.

Cruz’s use of colors in his artwork are meant to “seduce” viewers and make them look at his work long enough for the work to reveal itself.

“We don’t quite fulfill what you normally think of in society, and so there is a fracture in that,” said Cruz. “I’m constantly think about how to change the body.”

One of his performance pieces, Howtoorderchocolatecake is all about visibility and race. The piece is a video where Cruz can be seen covering himself in chocolate and singing in spanish while also yelling out the word “chocolate.”

Howtoorderchocolatecake speaks on the issue that people are not as vocal as they should be when it comes to race and it also touches on the fact that the artist himself has struggled all his life to be visible.

“So much of my work is about being visible,” said Cruz. “Standing in place and causing chaos or causing attention. Being present, being alive, and being able to change that space.”