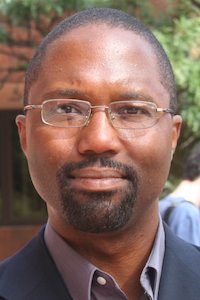 Despite being a somewhat low-profile CUNY school, one of the greatest things a student is sure to discover at York is the number of distinguished professors teaching at the college. Michael Sharpe, Associate Professor of Political Science, is certainly on that list.

Born to a Dutch father from Aruba and a Dominican mother, Sharpe is deeply concerned with and specializes in Caribbean and International Politics. He has published his own book, contributed to many others, published scholarly articles and is a living database of information on globalization, international migration and political transnationalism.

Q: To start off, Professor Sharpe, where were you born?

Q: Very interesting. How many languages do you speak?

A: I speak English, Japanese–my wife is Japanese, I lived in Japan and I speak Japanese at home quite a bit. Spanish is rusty, Dutch, and I also studied Swahili. So, five.

Q: And your mother is the Dominican one, correct? So you talk to her in Spanish?

A: Well, you know, she talks, I listen and answer back. [Laughs] So I’m one of those.

Q: I see. What inspired you to enter the field of Political Science?

A: I was always interested in politics. As a high school student I was very involved in left wing politics. When I was in college I got really involved in left wing politics, like the anti-apartheid movement, I went to North Korea, volunteered in Africa and it’s always been something I’ve been very interested in. Following my undergrad, I was trying to figure out hmm, law school or Ph.D., so I ended up working for a while for different NGOs (Non-Governmental Organizations). I went to the Netherlands because I had to go to keep my nationality. That’s where I met my wife and then I moved to Japan where I worked for this anti-racist NGO there. I’m one of the board of directors now and represent them at the U.N. here. Then I ended up working for the Japanese government as an analyst. From there, I was like, you know something, I think I really need a Ph.D. to really be fully recognized, so I decided to do that. It’s been a long journey. I never thought I would be a great teacher or at least I never thought I would like teaching that much, but I ended up really liking it. I love teaching, I love sharing, but most of all I love the written word. I love writing and getting published. If you ask me, there’s not a better job in the world you could have. It’s kind of like you’re working 24 hours a day because your mind is always on.

Q: As a person of Caribbean descent, do you feel that the Caribbean is underrepresented in the world? Why do you think that is?

A: It’s very well represented in terms of its cultural impact on the world. Salsa, merengue, food, the cultural stuff is huge. In terms of its political strength, it could be stronger. Cuba used to be there, but that light is changing. In Venezuela, you know, things are changing and I’m not so sure i’m so happy with those changes.

Q: How large of an impact would you say the Caribbean has had on world history, and what is its impact today?

A: I think it’s had a huge impact on world history. As I say in my classes, it’s a microcosm of the world. I think people don’t realize how significant the impact of the Caribbean has been globally, even up until today. Some of these ideas that we have, such as anti-racism, anti-slavery, liberation to mixed race people; the whole idea of a mixed race person is something new in the world. So I think we have made a tremendous contribution that’s not very well recognized, unfortunately.

Q: What would you say is the most significant issue in the Caribbean?

Q: Do metropoles, or mother countries, of non-independent territories in the region help or harm this issue?

A: They do both. For example, with the standards of good governance that they have. Today in a class I mentioned the use of alternative energy in Aruba. That’s the Dutch influence and their foundations for pushing this agenda. But the bad part is the control. How do you balance these competing interests? That’s the constant political question, how do we balance these interests.

Q: How can the Caribbean diaspora help the region from afar? Does it even care?

A: I was actually thinking about writing a book on the diaspora because being at York has really exposed me to this second generation and how large it is. You can call me generation 1.5. Among these people, there’s a sense of ambivalence and being lost. I can relate to it, when I’ve asked myself, what’s my place in this thing. Whereas other groups know they’re going back home one day and have these connections. But I think that being involved could actually help those that are here in America have an identity, get civically engaged and actually make change in their motherland. I think there’s a lot of potential if people realize, Hey, wait a minute, I’m a Trinidadian citizen too! I have some money, I’m here and I could actually make a difference. Rather than them saying oh, that’s just in the past, my parents were there, or just seeing it as a vacation spot and saying screw my cousins! [laughs]. So yea, I was thinking about that, about writing a book covering more than just theory, but practice and what can we do from here.

[Questions and answers have been condensed and edited for clarity.]