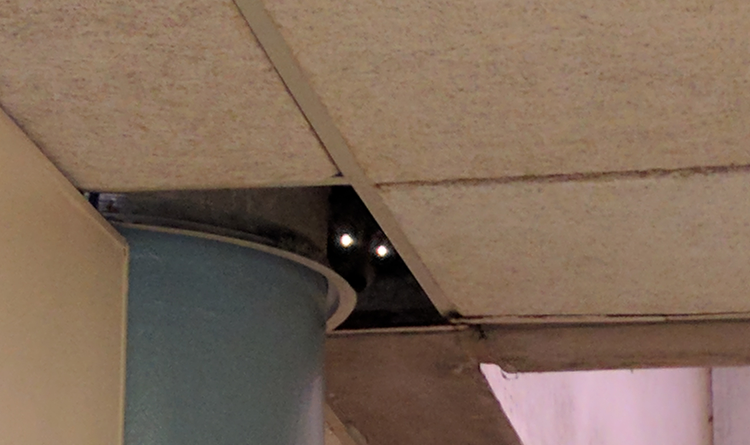 Students spotted another raccoon in the cafeteria earlier this month.

Another raccoon had been spotted in the cafeteria recently, raising concerns over what seems to be a pest infestation.

A photo of the raccoon peeking out from the ceiling in the cafeteria area, near the public safety office, had been posted on the York Cardinal app.

“My friend and I starting hearing little footsteps,” said Angel Taylor, an 18-year-old Physics major said. “At first, we thought it came from some people walking upstairs. Then we saw something poke out.”

This happened not long after another raccoon sighting last semester in the cafeteria. According to Student Government Association President Rachelle Antoine, the previous incident had been taken care of.

“I had been told by Alejandro Rodriguez, the supervisor of Building and Grounds it was caught in one of traps and taken away by pest control,” said Antoine.

Occupational Therapy major Tarnjit Kaur said  she believes the SGA and the college’s administration will solve the raccoon infestation.

“I’m sure the staff and student government try as much as they can within their power” said Kaur. “There’s no reason for them to say they’ve looked into it.”

According to Antoine, the infrastructure is the main reason pests  are coming into the building.

“If you look at the location of York College and its surroundings, it’s hard to say there won’t be any pests coming in,” said Antoine. “When they do come in at night time, they find little areas to hide in and nobody’s around to monitor that. We may have to reach out to our representatives in our district to check the area, especially by the train station for pests.”

Kaur also believes that the prevailing filthy conditions in the school are contributing to the problem.

“I’ve heard people blame the janitors for not doing a good job, but it’s really not their fault at all,” according to Kaur. “I’ve seen students here and high school students leave everything and the janitor has to pick it up, but they can’t always be behind you to do that and they get tired.”

James Minto, the Executive Director of Facilities and Planning said faculty have set traps for the rodents.

“A sighting had been reported to facilities and traps were already in position when they posted the photo,” he said.