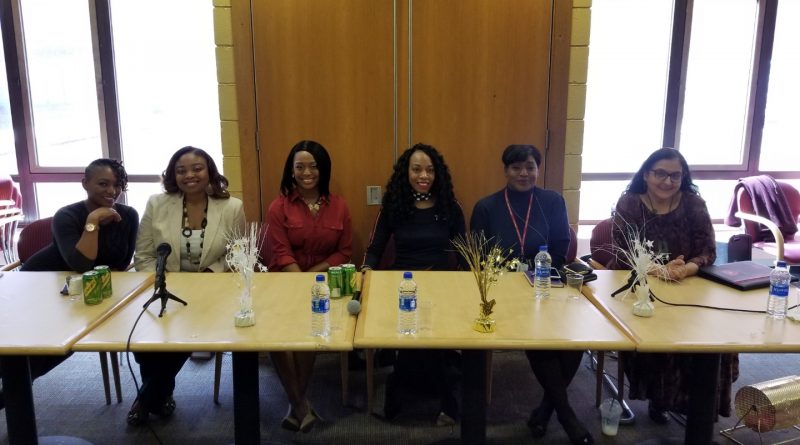 A panel of distinguished women discussed their experiences in male-dominated industries and their successful rise through the ranks by “breaking the glass ceiling.”

The panel was the second installment of the LeadHerShip series.  It is also the first leadhership event of 2019.

On March 28 the Office of Student Activities and The Percy E. Sutton SEEK program hosted the “The Journey of LeadHERship: Shattering the Glass Ceiling,” in the York College Faculty Dining Room.

The panel consisted of Dr. Donna Chirico, the Dean for the School of Arts and Sciences at York; Patricia Obamije, an Industrial engineer; Okema T. Moore, a producer and creative director; Ebonie Jackson, the director for the Women’s Center at York; Latasha Summers, a senior level flight attendant of JetBlue Airways Corporation and Tammie Williams, a community practitioner and former Nassau County Political Candidate.

Each woman examined the start of their respective careers, how they broke through the glass ceiling, and being a female leader in and out of the workplace.

“Being a woman of color in the field of politics [is a very] heavy ceiling,” Williams said about the glass ceiling in her industry. “You don’t have to be loud in the room because your presence is enough. You come from a line of people that died so we can be able to shatter the ceiling.”

Chirico, an educator, acknowledged that while glass ceilings do exist, sometimes the path to stop them is blocked by unimaginable obstacles.

“We make an assumption that the people trying to stop you are men, but sometimes it’s women,” said Chirico.  “Rather than working together to change the systems, we stop each other from changing the systems. Be mindful before you’re the one trying to stop somebody from advancing before you.”

For Patricia Obamije, the path towards her career was clear from the beginning but ended up hitting a roadblock. Obamije’s interest in engineering started from childhood. She noted how she would take apart electronic devices and determine how to put them back together.

“When I was younger, I always felt like I had an engineering spirit,” she added. “My high school teacher told me it’s going to be too challenging to be successful in an engineering career so look for something else.”

Currently, Obamije is part of the less than two percent population of black women working in the engineering field and became the  first African American women manager at her current place of work.

Moore, an actress and producer,  noted that the entertainment industry is similarly difficult, but in a different way.

“You couldn’t get into the business to make movies unless you were white, Jewish, male or had family relations,” said Moore.

In her field, Moore acknowledged that people were often times shocked when they found out that she was a producer due to the lack of diversity in the industry.

“When I first started producing and I would go to set people would think I was an actor, extra, or crafty,” she added. “As an actress I still push. I wanted to be a producer so I can hire people that look like me.”

The panel acknowledged the difficult and strenuous experience that women have in the workplace in a bid to be seen as hard working. Jackson, a mother of three, recommends a 30 minutes alone-time a day for working women as part of self-care routine.

The women gave advice to college students that are planning on entering the workforce.

“Whatever you’re doing make sure you’re having fun,” said Chirico.

“Lifting while you climb, bring someone with you, and enjoy your college years,” said Moore .

“Find a mentor, seek out a mentor,” said Obamije. “Find a sponsor, similar to a mentor but in your industry that can advocate for you.”

“You can’t plant the seed and eat the fruit on the same day,” said Summers. “When you reach success, bless somebody who wants to be where you are; mentorship. Pay it forward, pay it back.”