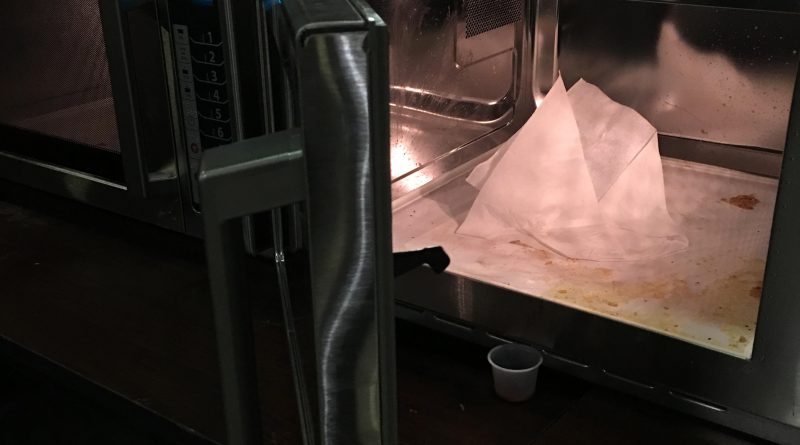 Students are complaining about the filthy conditions of the brand new microwave ovens in the cafeteria. Photo Credit: Ashley Oliver

As of December, the college’s cafeteria only had one functional microwave. The other microwaves were unsanitary and broken, with signs directing students to use the only other functional microwave in the SGA office 1G04b. In early December, college officials purchased six microwave ovens at the college’s expense, but the college did not receive them until February. Aladdin’s cafeteria employees have agreed to assign an employee to clean the microwaves at least once a day. Officials also provided a paper towel dispenser and a recycling bin for paper waste.

Although the microwave ovens have only been installed for less than a month, some students are concerned over the cleanliness of the machines.

“I still don’t bring my food because those things are disgustingly dirty,” said Communications Technology major Eunique Doran. “It’s a shame because they’re new and money was spent on it. The same money that the college barely has.”

Although the school purchased the microwaves, Buildings and Grounds is still not responsible for maintenance of appliances outside of the cafeteria, according to the Administrative Superintendent of Building and Grounds for Custodial Services, Alex Rodriguez.

But Doran said that students should be liable for cleaning after themselves.

“We’re all adults,” she said. “It’s a shared environment so be thoughtful and clean up your mess. It’s not that hard.”

“There’s no excuse as to why students cannot keep these microwaves clean,” said Student Government President Rachelle Antoine. “Our microwave in the office that we offered for students’ use got very dirty because they didn’t clean up after themselves. We will still help clean but we can’t do it by ourselves.”

Antoine said executive members of Student Government will continue to occasionally clean the microwaves, but she urged students to contribute to the overall cleanliness of the school.