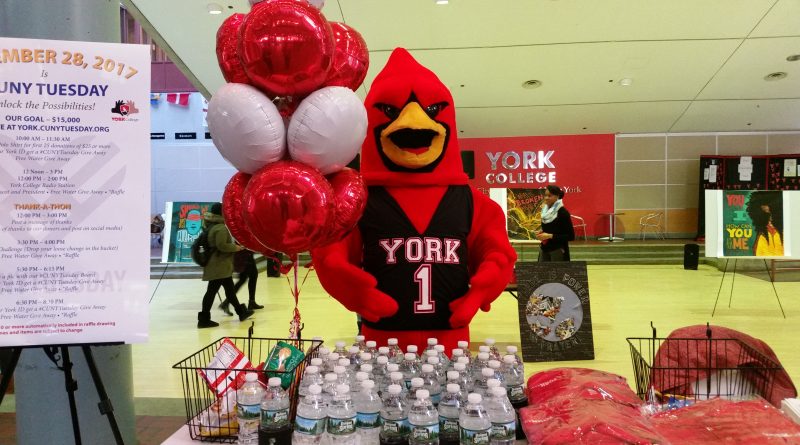 The Office of Institutional Advancement at York College hosted the first on-site event for Giving Tuesday on Nov. 28 in the Atrium.

Giving Tuesday, also dubbed CUNY Tuesday, is a 24-hour online fundraising campaign where all 24 CUNY campuses participate in order to raise funds for their campuses.

The #CUNYTuesday movement online link was available for 24 hours. All the funds raised for York College went towards The Fund for York and those funds are going to be used for scholarships, expansion of academic programs, faculty development, campus-wide technology access, and the maintenance of the campus and classrooms.

“So far we have raised almost $6400 and our goal is to raise $15,000,” said Geneen McCauley, the annual giving manager for Institutional Advancement. “I think we are right on target because it’s a 24-hour campaign.”

Overall 51 donors donated specifically to York College, almost twice the amount that was raised last year. In addition, other CUNY campuses raised an overall amount of $770,370 donated from a total of 3,531 donors to CUNY.

Brunilda Almodovar, the associate director of Academic Advisement, donated to the movement and said that York College is her second home.

“As an alumna of York College, I have spent the last 38 years giving back to my school,” said Almodovar. “I feel the money will help the college be a better place for everyone that works, study, and visits us.”

The students from the Learning Center donated $2,455 to the movement, McCauley added.

“Their donation made their biggest impact on the total amount that York raised on CUNY Tuesday,” said Higher Education Officer Mondell Sealy in an email.

The event started at 10 a.m. and ended at 8:30 p.m. McCauley gave away free bottled water, sticking four golden tickets on four of the bottles.

“The person who grabs the bottle with a golden ticket will get a free giveaway such as a Geico cozy water bottle holder, a glass with York’s 50th anniversary logo, a York College logo bookmark and many other items,” said McCauley.

She was also selling York College red polo shirts for $25, and anyone who spent or donated $10 or more was entered into a raffle to win gifts like Panera Bread and Red Lobster gift cards, movie passes to Alamo Drafthouse, and many other prizes.

“I would like to encourage students to donate, but I know it may be difficult for them,” said McCauley.

In the atrium, there was also a York charitable wall with “Ys” taped up for each donation a student or faculty member made, said McCauley.

“I don’t want to be like, ‘you have to give 10 dollars or more,’” said McCauley. “If people want to donate less than that, I’ll accept it.”