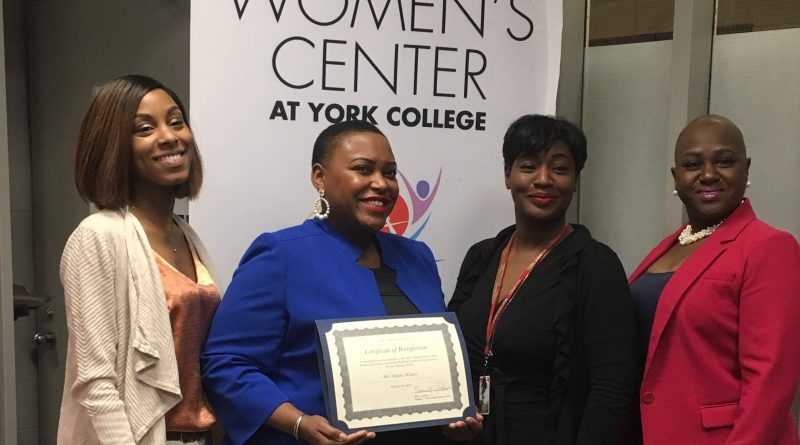 The workshop was led by Ebonie Jackson, the director of the Women’s Center, and Diana Hilaire, a Brooklyn Crown Heights native and the multicultural community engagement manager at Macy’s Inc.

Speaking to high school students, York students and faculty Hilaire, who in 2015 started Macy’s Modern Man (a program to teach men how to dress for success), provided first hand advice on how to prepare for a new job and even how to deal with hardships and stress caused by the job.

“At 23 years old I was sad and didn’t have any directions, no one to guide me, my family is from Haiti, and I am a first generation immigrant,” said Hilarie.

After realizing that she needed to further her education in order to reach the level of success she desired, Hilaire explained that she went on to obtain her master’s degree from Georgetown University.

Hilarie talked about the importance of  having a mentor or sponsor and other supportive people in your life in order to have a successful professional and personal life.

“I had hardships, failures and depression, but if you have friendships, they could help to pick you up,” said Hilaire. “I’m a boss mom living the dream.”

As a first generation immigrant from Haiti, she said she had no direction or guide when she first emigrated to America. Hilarie said that she owes a lot of her success to her mentor/sponsor, Dr Juan Battle, who put his “name on the line” and helped her find a stable job.

“I owe a lot of my success to my mentor and sponsor, it is super important to have a mentor,” Hilarie added.

Hilarie is one of the many guest speakers that The Women’s Center has invited this semester as part of their Women of Excellence Series, which brings professional, successful women to York so that they can talk about their careers and give advice to students on how to achieve their professional dreams.

Hilarie acknowledged that education is an invaluable experience, sometimes, despite the cost. She realized that she needed to further her education in order to reach the level of success she desired.

“Sometimes you have to overlook the money and categorize the experience,” Hilarie said. “One day you never know who is going to provide you an opportunity such as a janitor or someone from the cafeteria… it could change your life.”

She, however, stressed the importance of applying to scholarships, as she is still trying to finish paying off the loans she took out to attend the masters program at Georgetown University.

Hilarie even gave advice on how to quit a job when it’s time to move onto a better paying or even more enjoyable job.

“It’s about moving on when you’re dragging your feet,” Hilarie explained. “If you’re not happy because there is no purpose then you know it’s time to quit. But, before quitting, start looking for a job and go for interviews and then send the resignation letter. Have a 60 to 90 day plan after you quit. You need to have a plan about what are you going to do now.”

She also encouraged the audience to not be discouraged by rejection after the first interview, explaining that she interviewed at Macy’s six times before she got the job. She has now been working at Macy’s for six years.

The workshop also included Hilarie sharing successful tips that she learned through the mistakes she made at work.

“Be diligent, make sure that the dates and times are correct,” said Hilarie. “When meeting with clients, make sure the agenda is super tight, be early to calm down, cool off and to review paperwork.”

Evelly Boiguene, a Sports Management major and a senior at the York Early College Academy, said that she knows that the experiences and advice that Hilarie gave will help her in the future when she starts her career.

“It was relatable because she had experience and she gave advice,” said Boiguene. “Her story will help me in the future because I will know that I am not alone in certain situations.”