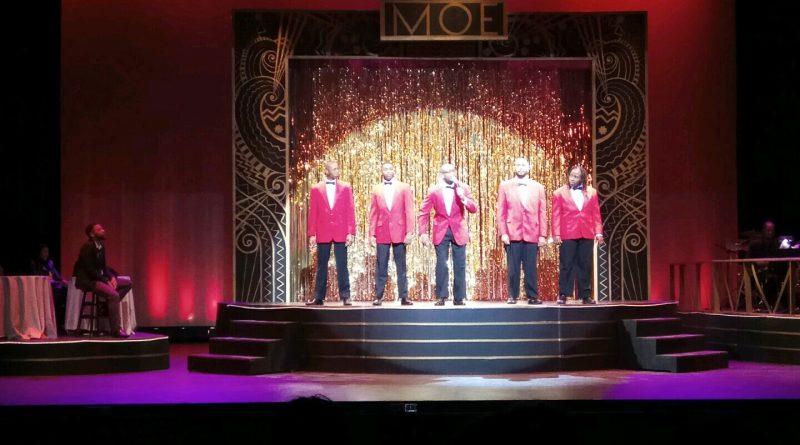 As the curtain began to rise at the Performing Arts Center’s main theater, a live band playing jazzy blues music captured the attention of audience members viewing Five Guys Named Moe on May 9.

The plot involves fixing a broken relationship between Nomax, played by Erick Carter, and his girlfriend (who never appears), and the play had no shortage of jokes. Often times the cast had the audience laughing at their ad libs and jokes.

Audience members were encouraged to “throw money” instead of clapping, garnering laughs from the crowd, and participating in the comedic portions of the play.

At one point in the play, the audience burst into laughter as one cast member sang a song with the lines “safe sane and single thats how im going to be” as they talked about how relationships make people crazy.

“It’s a lot more lighthearted than people expect it to be,” said Vanessa Cano, a Music Education major at York College.

They even had a bit where the cast told the audience jokes, including the old gag, “I must be butter because I am on a roll,” punctuated by a rim shot from the drummer.

With audience participation as a key part of the play, the cast set out to break the fourth wall and engage the audience. Often times the cast would stop their monologue and ask the audience questions about whether or not they were listening and teach them sing-along songs.

At one point they even broke out into a Caribbean beat-infused song and started a conga line throughout the audience.

“I think it really stands out when they bring in audience participation because it works,” said Cano. “It gets people more excited. I don’t like a disconnect between audience and performers so this definitely helps.”

While the comedy was good, the musical numbers stole the show. Mostly filled with jazz/blues influenced music, it had most of the audience talking about the vocals of the cast after the show.

“The boys’ harmony was amazing,” said a woman named Tonya, who came to support one of the cast members. “I really loved the throwback to the doo-wop era. It really reminded me of the songs I grew up listening to.”