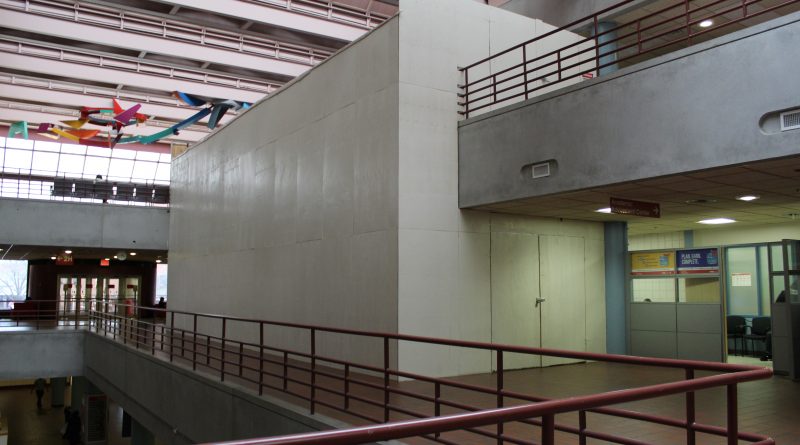 The escalator near the Academic Advisement Center is closed due to renovations. George Tavoulareas said he is not sure if there are any asbestos left in the escalators, therefore escalators need to be inspected first before the removal process begins. Photo credit: Greis Torres.

About a month ago, York had an asbestos abatement process that took place on Nov.13 and Nov.14 during evening hours, a college-wide email stated.

According to the email, the abatement process was conducted by a licensed contractor and monitored and handled by LiRO, a construction engineering company for the Dormitory Authority of the State of New York (DASNY).

“All of the work will take place on the 5th floor, which is a mechanical floor with limited occupancy. This work is required as part of the comprehensive upgrades to the elevators being conducted by CUNY and DASNY,” the Nov. 8 email stated.

“I didn’t know there was asbestos until now,” said Shemar Lantimo, a Biology major. “Out of 100 people maybe like 20 students actually check their emails. If you didn’t approach me about it I wouldn’t have known.”

George Tavoulareas is a part of the team from DASNY working on the abatement. The team is currently working on the elevator repairs happening on campus. However, he said that there is a concern of asbestos breaking while the repairs are being done.

“Since we are working on the elevators there might be materials containing asbestos,” said Tavoulareas. “Some of it can’t be tested because you can break it.”

According to Tavoulareas, there has to be an inspection before new elevators can be installed. He added that he is skeptical whether there might still be asbestos in the elevators but all the tests regarding the escalators came back negative.

“There has been confirmation of asbestos materials outside on the roof and it has recently been taken care of and an air quality test has been done,” said Tavoulareas.

Chad Chandler is a student who said the risk would not hinder him from attending classes because the college has started the process of abatement. “I expect that the school has our best interest at heart and take care of the asbestos and keep us safe,” Chandler said.

The college has not sent any emails regarding the asbestos abatement process since then. It is unclear as to whether the abatement was successful or not and if there would be any future abatements to come.

Attempts made to reach David Patnaude, the executive director of facilities and planning, were unsuccessful.

“All appropriate steps to protect the college will be taken in the course of removing these materials,” the college-wide email added.

In 2015 York College conducted another asbestos abatement process in the roof because of a repair project to fix a leak on the roof of the Academic Core building.

If you would like to know more about asbestos go to  https://www.maacenter.org/asbestos/