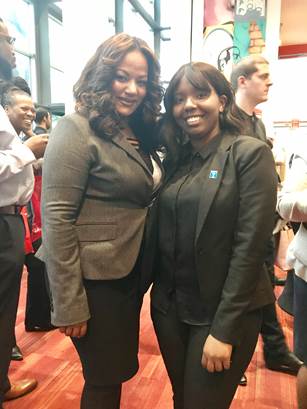 Alicia Smith, a senior at York, was recently hired as Constituent Liaison under Brooklyn Assemblywoman Jaime Williams after the completion of her internship. Smith is currently working towards her bachelors degree in Social Work.

Smith began her path to success when she was introduced to 59th District Assemblywoman Williams back in 2016 at the CUNY Women’s Leadership Conference at Hunter College. As a constituent liaison, Smith will be responsible for attending meetings on behalf of the Assemblywoman, acting as a liaison between the district office and the Albany office, performing routine office tasks and more important duties.

In addition to working beside each other, the two have many things in common- Assemblywoman Williams graduated with a Bachelor’s degree of Social Work from York in 2011. Smith will be completing her Social Work degree in December. Both of them are mentees of Dr. Selena Rodgers, an associate professor and founder of the Master’s of Social Work program at York.

“Attending York College has allowed me to have resources, knowledge and field practice,” said Smith in an email. “As well as meet amazing peers, faculty/staff, and in particular my mentor Dr. Selena Rodgers.”

“It has been my pleasure to mentor Alicia throughout her academic and professional journey,” Rodgers said in an email. “Their advocacy connection reaffirms for me that purposeful mentorship matters.”

As Smith plans to go on to bigger and better things once she graduates in December, she hopes to practice what she learned as a Social Work major towards community advocacy and policy.

“I hope to gain from this opportunity experience in community organizing and how to advocate for policy change,” said Smith.

After graduating from York, Assemblywoman Williams moved on to achieve several milestones such as receiving her masters at Fordham University, and counseling women and children who have experienced domestic abuse, according to the Assemblywoman website.

Smith aspires to be as active as Williams is in the communities she represents.
“This position has inspired me to continue to get involved and find ways that I can better my community,” said Smith.

Smith is currently looking for graduate school opportunities for the fall of 2019.