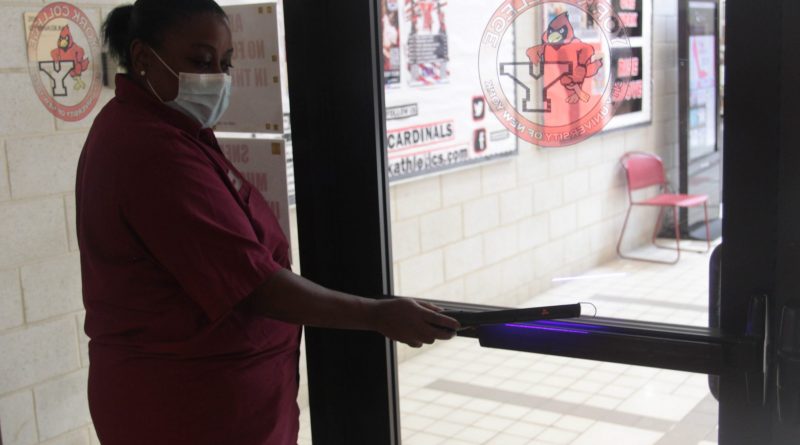 Custodial Staffer, Sheena Starkey, using an ultraviolet light wand to disinfect frequently-touched surfaces such as this door handle in the Health and Physical Education Complex at York | Photo taken by Parsram Stanley

While most of the York College community have been away from campus since the COVID-19 pandemic shut down CUNY in March, the essential workers of York haven’t gone anywhere.

On March 12 all in-person classes were cancelled for the remainder of the semester. On March 18 the campus was entirely shut down after an employee reported symptoms of COVID-19 four days earlier. From that point on, only “essential” staff were allowed on campus, which includes members of Custodial Services, Buildings and Grounds, IT Services and Public Safety. Beginning that Wednesday, York’s Custodial Staff began the necessary but grueling task of deep cleaning the entire York Campus.

“When the pandemic began it was very stressful,” said York custodial staff member Sheena Starkey. “Once they had the school cleared out, every part of the school was cleaned from top to bottom in any reachable area. There was a company that came in and cleaned everything and went from building to building doing so.”

Throughout the pandemic, York’s custodial staff have been constantly making sure the campus is as clean as possible, spraying and wiping down any frequently-touched surfaces. These include telephones, computers, security desks, bathrooms and more. The staff also use ultraviolet light “wands” that are effective in killing viruses.

As part of the cleaning measures, custodians are all given designated areas on campus to disinfect. For staff member Trina Pegues, her duty is keeping the gymnasium area safe and clean for students who have lab classes there.

“Before class, I wipe down each desk, the chair they [students] sit in, and we provide them with hand sanitizer as well,” said Pegues. “When students leave, we wipe it all over again with bleach and water.”

Starkey said bathrooms get even more attention than before, with staff wiping them down less than every two hours. According to  York’s “Cardinal Guidebook,” there are 42 public bathrooms in the Academic Core Building alone, (where Starkey is assigned to), in addition to the ones in the other five campus buildings.

Despite the job becoming more rigorous, Pegues and Starkey said the new element to their job has become routine by now.

“Once you are in the groove of it, and you have a system of how you go through it, it’s pretty much easy,” said Starkey.

Although the job may seem routine by now, the months prior weren’t all that easy for custodians at York. In early April, the death of a custodial staff member, Luis Diaz, was announced to the public. Pegues, who was the last colleague to speak to Diaz before he passed, suggested Diaz make a visit to the doctor when he told her that he wasn’t feeling well. Within the next week, staff were informed that Diaz was in a coma.

“Once that happened, everybody was afraid to come to work,” said Pegues. “He told me he had a fever coming on and then a week later I got a call that he was in the ICU.”

Although Diaz’s death left a rough patch in the lives of his fellow coworkers, they say they didn’t feel alone in coping with the loss. The custodial staffers credit their supervisor, Administrative Superintendent of Campus Buildings and Grounds Custodial Services, Alejandro (Alex) Rodriguez, for creating a comfortable environment when the world was just opposite that.

“Even when Luis died, he gathered all of us together to let us know we are all in this together,” said Starkey. “When it came to Luis, Alex brought us all together, we did a prayer, and we had a moment to talk about him. It was like our own memorial for our co-worker, and that was so emotional for all of us.”

As for other essential staff members like Public Safety many things have remained the same such as routine building checks and staff roll calls. However, applying the rules of the pandemic, typical operations have shifted. When arriving on campus, all staff or visitors go through a mandatory health screening which is conducted via the instruction of Public Safety.

“We have to screen everybody now when they come in and make sure they have their Everbridge App downloaded,” said York’s Public Safety Lieutenant Carlos Suarez, referring to the health-check app that screens visitors once they make an appearance on campus.

If visitors don’t have the app, they must fill out a similar health screening via a desktop computer placed at the Liberty Avenue entrance. Once students complete it, their temperature is taken and their class name and location is recorded by a Public Safety.

Suarez said he and his colleagues are interacting more than they did before because of the decreased campus population. However, as we stood with him in the main building’s virtually empty Atrium, he said everything still feels very different. For Suarez, he misses the student interaction that was more readily available before the pandemic shutdown.

“I’ve been in CUNY for 25 years so this is a totally different atmosphere for me,” said Suarez, who mentions that the only other time the campus was deserted in the mode it is now, was when Superstorm Sandy hit the Northeast in 2012. “If it continues like this, it’s going to take a toll on people. From talking to a lot of students, they’ve told me they feel safe here on campus.”

Another Officer, Danny Yu, was wearing latex gloves and standing behind the plexiglass barrier when Pandora’s Box spoke to him.

“It’s important that we protect ourselves too,” said Yu. “That’s part of why we have plexiglass set up and our higher-ups always tell us to wear our PPE equipment not only to protect ourselves but also the college community.”

Despite the risks of being an essential worker, many officers still feel comfortable coming to campus to perform their duties.

“Personally, I do feel safe working during the pandemic,” said Nathan Boco, a Campus Security Assistant (CSA) at York who also holds down a job as an Emergency Medical Technician (EMT).

Boco’s family was initially worried about him working both jobs in the beginning of the pandemic, but after reassuring and reminding them about his passion being a CSA and EMT, Boco said they became more understanding of the position he’s in.

“At the end of the day, this is what I love to do, becoming an EMT as well as helping people, which is part of being a CSA officer,” said Boco.

Others also have side jobs during the pandemic outside of Public Safety, but they aren’t given an official title, such as Boco’s.

“I have a daughter so I am doing remote learning with her,” said Officer Tiffany Ottley. “I have a whole new understanding of what it’s like being a teacher– although I’m not one– but I’m kind of getting a glimpse of what that’s like.

Other essential staff such as the IT department are helping their own students through distance learning, providing laptops and tech support from the campus to students at home. After multiple attempts to reach out to the department about how they are handling their on campus jobs, Pandora’s Box has not received any comments.

No matter what the job, York College President Berenecea Johnson-Eanes commended her essential staff for the upkeep of the campus throughout the pandemic.

“Our essential workers have been outstanding and I extend my thanks to all who are making the sacrifice to be on campus to make it safe and clean and technologically sound,” said Eanes. “Their commitment to their jobs and to York is highly appreciated and I want them to know that I ‘see’ them and appreciate them.”