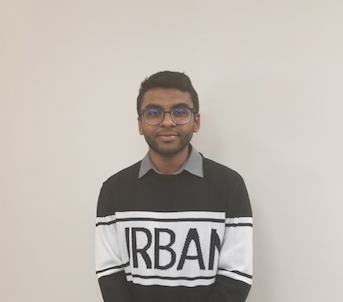 A deleted email and an encounter in the hallway was how Tawhid Pranto found out he was the valedictorian for the class of 2019.

Pranto, a Physics major, said the original valedictorian offer letter sent to him by Provost Panayiotis Meleties was accidentally deleted. It was not until Pranto encountered Meleties in the hallway that he realized what had happened. Meleties resent the email, Pranto accepted the offer, and the wheels were set in motion.

“It’s still overwhelming,” he said. “I did not know it was going to be a big deal. I knew the term valedictorian but, I didn’t know what it meant. It’s been overwhelming because I don’t like much attention.”

Pranto comes with an unexpected twist. He is a graduated student of the Fall 2018 semester and is now an adjunct lecturer in the Physics department for the Spring 2019 semester.

“As soon as I graduated, the department offered me the position to join as an adjunct lecturer,” Pranto said. “So, right now, I’m teaching two entry level introductory courses.”

Pranto said he is also scheduled to teach a summer course in the department as well.

He acknowledged that the spring semester was a somewhat unusual for him because he was neither a student nor actually a professor.

“I still see them as mentors because I still do research with them,” Pranto said about his former professors who are now his colleagues. “Because, when you’re talking about physics, it’s like solving problems, so any new idea is welcome.”

He was originally scheduled to continue lecturing in the Fall semester but was unable to commit to it after he was accepted into the Physics PhD program at the City University of New York Graduate Center.

“But, they always mentor me even for my PhD program,” Pranto said. “They know some of the teachers from the other facilities in the CUNY grad school program amd they advise me how to find a research advisor and how to get a grant for the summer.”

When he migrated to Jamaica,Queens from Bangladesh, Pranto originally wanted to pursue an engineering degree at a neighboring college. Because York does not offer a degree in Engineering, he decided to take the pre-engineering courses that were available at York and was prepared to transfer to either Stony Brook University or City College to complete his degree. However, after he got accepted into Stony Brook, he was discouraged by friends who had previously gone to the college.

“Because physics and engineering, their start is the same, so as I took the upper level courses in physics as well, that interest me a lot,” he said. “The one I was looking for was actually physics, but I thought it was engineering because I didn’t have much knowledge about it.”

He also credits Professor James Popp and Professor Tim Paglione who influenced his decision to stay at York.

Because he was able to find his passion, Pranto wants to help others find theirs as well. He mentors about three of his students who have to make the same decisions he did as a student about physics and engineering.

“I tell them to come to me, and they actually do, they ask advice on professors and classes to take,” Pranto said. “I tell them take this class, or not, this is what you can study or this books are actually better for you.”

Pranto said his first career choice is to become a research professor in universities like CUNY. He said if he does not go through the education route, he would become a scientist in the industry. His plan to become an experimental physicist combines his former passion for engineering and his current one for physics.

Pranto is also a member of the college’s Honors program as well as the award winning Astrobotics Research and Design program.

Ever since he became the valedictorian, Pranto said he has been receiving much attention. He said his boss, Jonathan Quash, at the York’s Men’s Center is always introducing him to people as the valedictorian.

Pranto said he planned on writing his speech as soon as the semester was over.

“Because it’s finals week, and I’m a little behind on my grades, so, I’m catching up on the grades,” he said. “After, I’m done, I’ll write the speech.”