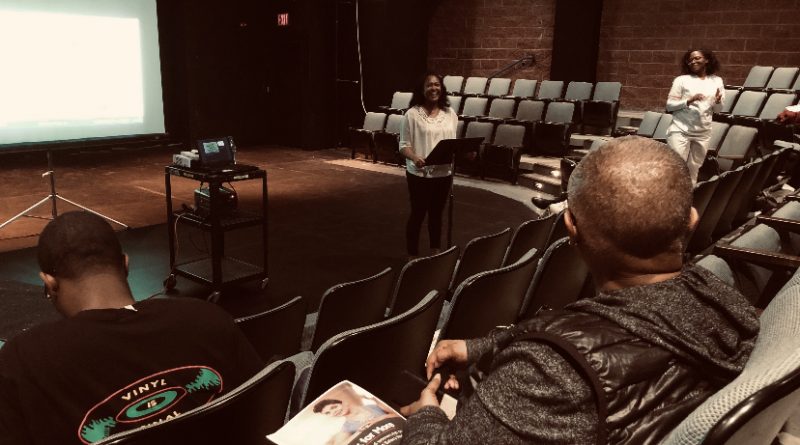 Jasmine Baker Covers sample pitches as attendants listen and refer to their workbooks.

One of the many events that were held by the Women’s Center at York during Women’s History Month was the Women’s Salary Negotiation Workshop on March 10. Attendees were taught how to negotiate for higher salaries, positions, and benefits.

The event was co-sponsored by The American Association of University Women (AAUW) and Women’s Society Student Club, “Women.nyc.” The workshop was led with a focus on ending the gender pay gap between men and women. This workshop taught women, negotiation skills and self-empowerment skills, that they would carry to their employers, so it shows their individuality.

“The reason we’re working to bring these workshops to women, New York City, and all across the country is because we have a long way to go until the gender pay gap is eliminated,” said Jasmine Baker, Deputy Director of the club, “Women.nyc.” “This is an issue that can affect you as early as your first job and it can follow you all the way into retirement. We want to bring you these tools because we want you to feel empowered to advocate for yourselves, your own career, and overcome any pay gap you may be experiencing.”

The gender pay gap is one of the many barriers that stand between men and women. The AAUW “Work Smart” Program teaches others that the cause behind the pay gaps is due to factors such as, underrepresentation of women in high-wage jobs, devaluing women-dominated professions, and fewer earnings for women who are handling the same responsibilities as men.

“Women are paid 82 cents for every dollar a white man is paid and that’s on people who work full time. In New York State, it’s a little bit higher: about 89 cents but that is on average,” Baker said. “If we dig deeper, we can look at the gender pay gap by race and as we would’ve expected, race as a cross-section exacerbates this issue. It exists, this pay gap, in every line of work, in every education level, and at various ages.”

AAUW’s research report, “Graduating to a Pay Gap” claims that after considering many variables that impact the gap, there is still a 7 percent gap right after college that could serve as a possible effect of gender bias, under which an attendant of the workshop felt is still present in her field.

“I think that men are typically reared, in terms of even early childhood, to go out and be assertive and get jobs and be what you would call the ‘breadwinner’ whereas women traditionally aren’t seen in that way,” said Jasmine Escalera, Career Coach for the Mount Sinai Health System. “I work in STEM and STEM is traditionally a very white male-dominated field. It has changed a lot recently, but I do think that because of my gender and compounded with my race that I’ve not only not been paid the same as white men, but my voice is not represented as much.”

After defining what the gender pay gap is specifically and its causes, Baker covered the tactics that is used to combat the gap issue and help women stand their ground to get what they want and deserve out of their employers. Methods included negotiating professionally, establishing a salary range, considering the benefits involved, and making attendants aware of the salary history ban, that was recently established on Jan. 6.

“If someone asks you your salary history, that is a red flag,” Baker said. “When companies ask you this question, they only have one goal in mind and it’s to get you to reveal your number. Before it was illegal, they would say ‘we can only pay you “x” percent more than you made before.’”

“When it comes to negotiating, as soon as you put all of your cards on the table, that’s when your employer gains more leverage and then you’ll never know what money you’re leaving on the table because they won’t offer it,” Baker concluded.