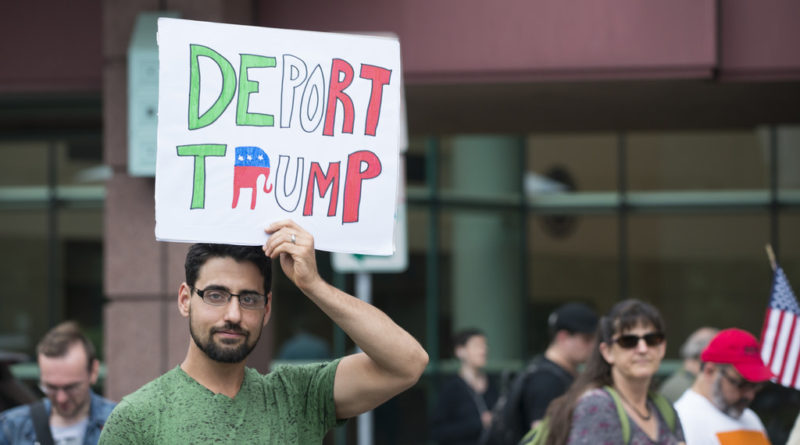 The number of hate crimes in the New York City increased by 35 percent over the same period last year with more than 40 cases documented since Election Day, according to the NYPD.

Thousands of protesters marched to Trump Tower near the intersection of 57th Street and Fifth Avenue in Manhattan the day after Donald Trump won the presidential election. Protesters chanted “not my president!” in city streets while “Not My President” and “Love Trumps Hate” trended worldwide on twitter until midnight.

According to The Southern Poverty Law Center, a non-profit organization that monitors activities of domestic hate groups, over 700 cases of hateful harassment or intimidation in the U.S. developed the week after election night. They also report 437 cases of intimidation aimed at blacks, people of color, the LGBTQ community, Muslims and women post-election night.

“I believe a nation of white males essentially feeling somehow disenfranchised, they feel like they have been forgotten,” said Douglas DiToro, an English Professor at York College. “So once Trump is starting with inflammatory speech these people react. They are really lashing out their own frustration. White working class males are lashing out and Trump gives them the opportunity.”

Hate crimes in New York have spread from the public to college environments. At NYU, a Muslim prayer room was vandalized with “Trump” written on a door in magic marker. A Facebook post by the NYU Muslim Students Association stated, “This morning at the NYU Tandon School of Engineering, Muslims students found “Trump” scrawled on the door of their dorm, realizing that our campus is not immune to bigotry that grips America.” After that incident NYU’s Muslim Students Association held a support group with students to calm their fears.

Here at York an LGBTQ flag in Room 1B03 was vandalized with the words “Trump Rules” written on it.

In Brooklyn Heights, vandals struck at Adam Yauch Park which is dedicated to the late member of the Beastie Boys who died of cancer in 2012. On one of the park’s equipment there were two swastikas painted along with the words “Go Trump.” Yauch and his bandmates came from a Jewish background, many citizens from Brooklyn felt angered that their beloved park was used as a place to spread hate. A day after the vandalism, kids placed hearts and flowers to replace a message of hate with the message of love.

Residents brought flowers and notes, a new message was chalked onto the playground’s rubber mat “Love Trumps Hate” After the incident, city workers removed the graffiti and police has begun to investigate. Two days after the incident, a “Stand Up Against Hate” rally was held. Adam Ad-Rock Horovitz, a former Beastie Boys member, joined 500 plus local residents at the rally. State senator Daniel Squadron, Congresswoman Nydia Velazquez, and City Council members Stephen Levin and Brad Lander also made an appearance.

The Anti-Defamation League, a nonprofit organization that analyzes hate crimes, stated the swastika is a significant hate symbol that is adopted by the Nazis and unacceptable for anyone to use to exhume hate.

“Trump is not doing a good job to deal with these hate crimes,” said Donique Martin, 22 Biology major at York. “He would have to retract his statement and I don’t think he will do that. I believe Spanish groups get discriminated the most.”
LGBTQ members feel especially terrified of what will happen to them with Trump as President. Mike Pence, vice president elect, is a supporter of conversion therapy and he says he believes this therapy could make LGBTQ members “normal” again. The conversion therapy concept harbored homophobic fears and thoughts of homosexuality being an mental illness.

“I was at a rally on Wednesday for LGBTQ safety in Harlem and a black woman saw us and called us faggots while she was walking with her child,” said Jeff Hicks, a Social Work major at York.

In late November Governor Andrew Cuomo announced a new state police unit investigating hate crimes as a response to the recent increase in incidents. The new unit will include officers from across the state who have training to stop bias crimes and will be able to help district attorneys in courts. Cuomo also announced the creation of legal defense for immigrants who can’t afford on their own.

Cuomo sent an open letter to all college students acknowledging fears college students have shared since Trump’s victory. The governor has sworn to protect all New Yorkers from hate. Lastly, he provided a hotline for hate crime victims.

“I think knowing he will protect us makes us feel that we are not alone as minorities and transgenders,” said Anneisa Hussain, an English major at York. “But we have to be worried if the lawmakers in Washington will not go against our rights as human beings. After all, we live in a country with diversity and we need more lawmakers and politicians to stand by our side.”

Officials at York are remaining vigilant about the anxiety many students and staff members have expressed, offering extended services at the Counseling Center in recent weeks.

“Trump will soon be the leader of this country and he needs to lead by first acknowledging that there is significant healing needed to bring this country back together and speaking up against these incidents when they occur rather than simply going on a talk show and saying ‘stop it,’” said Alicia Franqui, Interim Chief Diversity Officer at York.

“As I see it, intolerance toward others regarding racial identity, religious ideology and sexual orientation is an illness of learned behavior,” said Martin Colucci, Psychology professor at York. “Bigots aren’t born, they are nurtured and groomed by the influential behavior of family members etc.”

George Soros, a financier and a Holocaust survivor plans to commit $10 million from his foundation to help fight hate crimes. The Open Society Foundation plans to spend $5 million to fund grants to develop plans to work with victims of hate crime.

“I believe it can help us greatly, we need more people to fight hate crimes with us, if we are united it will make us stronger.” said Sadat Rahman, a Sociology major at York.