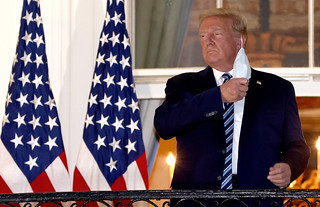 President Donald Trump came back on the campaign trail no less than seven days after he contracted COVID-19 in early October.

Trump may not have been able to be on the trail when he was being treated at Walter Reed Medical Center, but his tweets, social media videos, and communication with his supporters did not cease. While his health was a concern for millions of Americans, Trump continued to behave as if it were business as usual riling up his base and telling them in regards to COVID, “Don’t let it dominate you don’t be afraid of it, you’re going to beat it.” President Trump informed the public “I feel great, better than I have in a long time,” and told Americans “Don’t let it take over your lives,” as he stood in front of the White House without a mask.

Backing up the President’s claims that he recovered were his physicians from Walter Reed including Doctor Sean Conley informing reporters at a press conference to provide updates on Trump’s condition saying, “I think you’ve seen the videos and tweets, he’s back.”

Not long after the president was released from the hospital, reports came of his youngest child, fourteen-year-old Barron Trump, contracting COVID-19. As the number of infected COVID-19 White House staffers and associates of the president continues to grow, he is making plans for additional rallies in the states of Iowa and Pennsylvania. Even though Trump was acting nonchalant about his brush with COVID-19, presidential debate organizers took him being infected much more seriously and decided that the next debate between Trump and Biden would be online. However, Trump felt having the debate online would not work for him especially if the moderator would be able to cut his microphone off.  This is something the president would want to be in control of to get his points across.

After the first debate where both candidates were talking over one another, many thought it might be best to have a debate where the microphones could be controlled similar to an online video conference communication platform. Furthermore, coordinators of the debate wanted to air on the side of caution with the president still at risk for spreading the airborne disease. On the other hand, the President seemed to not care who he could possibly infect and thought an online debate would undermine him. Therefore, Trump abruptly decided not to participate, particularly since he said, “Now I’m better, and maybe I’m immune.” Hence, Democratic Nominee Joe Biden was willing and able to participate in the virtual debate.

Once the president backed out of the second debate, Biden decided to have a town hall event for the same date as the original second debate and Trump also took advantage of it being canceled by holding a town hall event the same night. The town halls were supposed to allow both candidates an opportunity to address and answer questions from voters. But instead, it caused a division amongst those who would benefit the most from hearing the perspectives of each candidate because they both held their town halls simultaneously. If there was a winner between the two, it was Biden with reports indicating more watchers tuned into his town hall event. However, the clear losers were the American people who had to go back and forth to figure out where each candidate stands on issues that matter to them the most.

Just to mention, some include unemployment, the job market, the economy, climate change, health care, COVID-19 and the vaccine for it. Americans are in need of leadership, not more divisiveness. Ironically, the two town halls were a perfect example of how divided we are as a country. Also causing a divide in our country is whether or not to wear a mask to prevent the spread of COVID-19 and the president who does not really care to wear a mask is becoming the face of the problems reflected in our nation. As Americans vote via mail and early voting, they will continue to follow updates on the president’s health, especially since he did not want to answer when was the last time he tested positive for COVID-19 during the town hall. While the coronavirus hasn’t slowed down Trump, it has definitely made voters pay closer attention to his health and the way he handles himself during a pandemic.