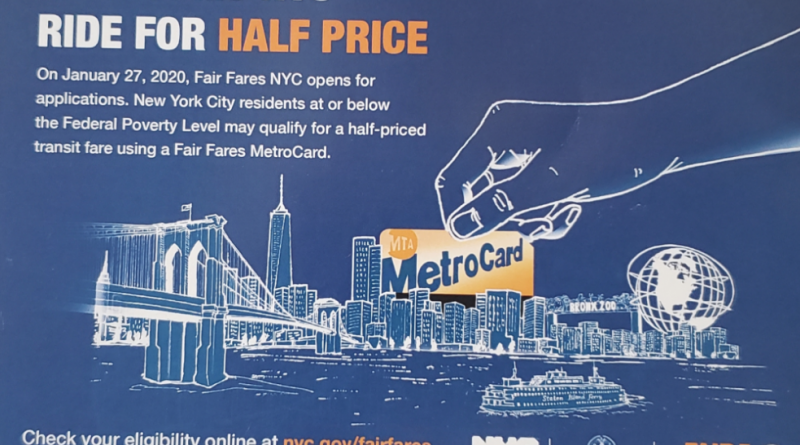 Some mass transit riders in New York City will now be able to purchase MetroCards at a reduced price. The “Fair Fares” initiative is a New York City program that offers a half-price discount on metrocards to those who are eligible, no matter their employment, immigration or other status.

The Fair Fares program works by allowing 18-64 year olds who live in New York City to obtain a discount on the purchase of a Metrocard if the person has an income at or below 100 percent the federal poverty level. Eligibility is based on a sliding scale depending on household size, for an average five-member family the income limit is $30,680. Once a Metro Card user meets these requirements, they would be eligible for a price reduction on their metrocard.

The city officially launched enrollment into the program in January. According to the City’s website, over 100,000 New Yorkers have been enrolled in the program. The MTA already offers half-price fares to eligible students, seniors and people with disabilities.

The program has the potential to benefit thousands of college students at the City University of New York, many of whom are facing food insecurity and are struggling to make ends meet. Fair Fares is also open to certain NYCHA residents, veteran students or New Yorkers receiving cash assistance or SNAP benefits from the City’s Human Resources Administration (HRA).

Riders Alliance Community Organizer Danna Dennis is helping spread awareness about the Fair Fares program by going directly to train stations to provide information to riders. Dennis was recently at the Parsons/Archer Avenue train station to speak directly with transit riders and answer questions about the requirements for qualification.

“Students at York College could benefit from the Fair Fares program,” Dennis said. “And alongside the Riders Alliance, I encourage commuters to get further details about the program by visiting nyc.gov/fairfares.”