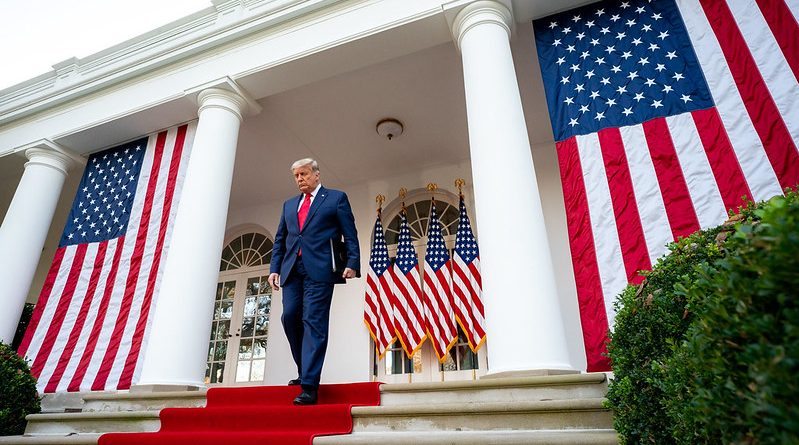 Election 2020 draws closer and the United States is still struggling with COVID-19 and now New York voters are dealing with feelings of mistrust around mail-in-voting.  Experts say that many New Yorkers are conflicted between the two candidates, but they will get the chance to make their voices heard at the ballot box.

“We, as a nation, are at the crossroads on where we as a nation are going to go,” said Junis Warren, a York College Political Science Professor, in Queens.

The Trump administration continuously makes missteps with its handling of the pandemic regarding consistency with federal guidance as the Centers of Disease Control and Prevention reports COVID-19 cases are still on the rise in the country.  The New York Times reported that this has created challenges for the American voting process, especially for the communities hit hardest by the pandemic, and what many experts label as voter suppression.

“What happened to the US Postal Service is against the Constitution,” said Warren.  In an email interview, she explained that the recent move to “dismantle” the Postal Service is unconstitutional because of the apparent motive to influence the election.

“It is a criminal act, meant to steal the election by slowing down the mail.  Remember, the Founding Fathers outline the need for a Postal Service in the US and has actually mentioned it in the governing document,” said Warren.

Warren further explained that the Republican party has been pushing for years to privatize the Postal Service by claiming that the agency is going broke despite evidence it has sustained enough revenue to remain solvent.  The New York Times, NPR, and The Washington Post reported that many states, including New York, have encouraged mail-in-voting now face the challenges of delayed mail due to the Postal Service’s funding crisis that has raised questions around the reliability of this voting method.

Furthermore, York College Political Science Professor Michael Sharpe, in a Zoom interview, stated that the president further undermines the election by questioning the integrity of its outcome before it has happened.  “Some people are voting by mail, but he is already invalidating an election- the first time in our history for a president to do that,” he said.

A YORK STUDENT LEADER SPEAKS OUT

Pamela Garcia, the Vice President of the Political Club at York College and a community organizer, said voter advocacy groups have had to evolve with the needs of the voting population by expanding their online platforms to engage and empower voters on a larger scale.

“Ultimately you have a lot of people that are skeptical about the voting process in general even before COVID,” she said.  “Working with multiple groups at various times for me it was more about how I could get my community to understand that they had power in exercising their right to vote,” she said in a phone interview.

Garcia further explained that advocacy groups are fighting for more people in the community to be engaged in the election process.  “They are advocating for resources and reforms such as federal funding for the US Postal Service,” she said.  “They are fighting barriers and burdens that voters have to face via voter suppression such as tactics for example like a purging of the voter roll.”

Warren believes that minorities are at risk with their vote.  “The Black and Brown communities, largely made up of essential workers, face the highest risk of a compromised vote for various reasons,” she said.  “They are exposed to pre-existing conditions and are at greater risk of dying quicker than the white populations who have better areas of: social distancing, access to better healthcare, can work from home in greater numbers, and can exit the cities at a quicker pace than the Black and Brown.”

However, Garcia identified that the hardest-hit demographic are seniors.  The CDC reports that adults aged 65-years-old and over account for 80 percent of COVID-19 deaths.  This group that she considered to “vote the hardest” has been devastated by the pandemic.

Also, she explained that many seniors face the fear of voting in person due to high infection risk and concerns that their vote may be discounted due to the distrust that has been generated around mail-in ballots and subsequent mailing delays.  Mail-in-voting is new to the voting culture of New York and the added frustration and distrust are warranted as the board of elections often does not inform if a vote was received nor discounted.

THE PEOPLE OF QUEENS

Clyde Mason, 64, a carpenter in Queens, said that he remains an unregistered Democrat but feels that many of his peers around him will respond to the Trump administration by voting.  “I can’t speak for nobody else, but I am pretty sure that a lot of people will vote,” he said in a phone interview.  “They will vote him out of there,” he said.  He holds the president responsible for the current state of the country however he feels that his vote will not make a difference.

New Yorker and Democratic voter Kendrick Elder, 26, contributing writer to Curiosity Shots and a York College CUNY Senior in Queens, had strong opinions about the administration.  “I hold Trump accountable because he apparently knew about the whole thing since dating back to February before it got nasty in New York,” he said in a phone interview.  “He kind of kept it quiet.”

The experts agree that the mail-in process is even more important during this health crisis and have optimism behind voter turnout for Election 2020.  Warren anticipates that the average New Yorker will make it to the polls and despite the election processes surrounding mail-in voting she is “excited” for Decision 2020.  She advised that the Black female demographic had saved the Biden campaign and expects that their family members will follow suit as well as many women of ethnic minorities (including Latino, Asian, Native-Americans, and Muslims).

“We are coming out,” Warren said.  “It doesn’t matter what the Republican party has tried to do to prevent this election from happening.”