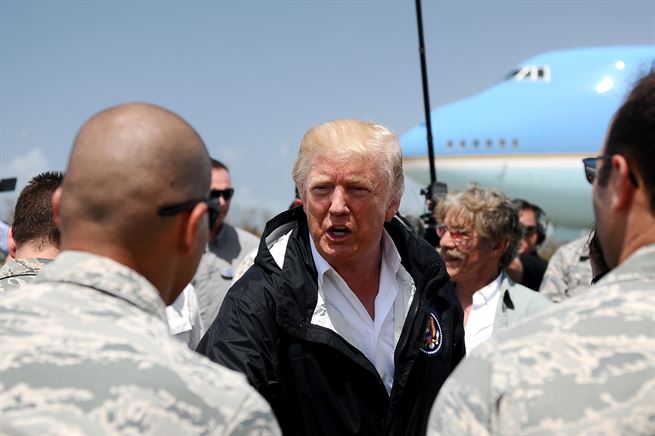 President Trump went to Puerto Rico on Oct. 3 to talk to the political leaders of the island about recovery efforts amid criticisms of his administration’s slow response to aid in their relief efforts.

His visit came 13 days after Hurricane Maria destroyed the island’s infrastructure and left 3.4 million American citizens with no electricity or running water.

Originally the Trump administration pledged that they would send help to the decimated island and aid in their search and recovery efforts, but days after the storm many felt that he had failed to make good on that promise. The administration was criticized with seemingly forgetting about Puerto Rico’s crisis, especially when Trump soon left for vacation at one of his golf courses.

Eva Vasquez, an assistant professor and coordinator of York’s Puerto Rican Studies program said she feels that Trump is oblivious to the fact that Puerto Ricans are “American citizens by birth and that there is not a separate citizenship.”

“My concern is that once again we are being treated as second class citizens,” said Vasquez. “I don’t understand the idea that we have to wait for help, and it is hard to deal with it because it’s like we are always at the bottom of the priorities.”

When asked multiple times why he had not sent help yet, Trump was quick to blame the ocean reiterating in both a meeting and his political rally in Alabama that efforts are slow because Puerto Rico is “An island. Surrounded by water. Big water. Ocean water.”

Many thought that Trump was simply further concerned about more domestic issues like the “take a knee” debate that he tweeted about in earnest.

Trump suffered from even more criticism after he tweeted about San Juan Mayor Carmen Yulín Cruz Soto, who pleaded for help and criticized him and his administration for their lack of help saying that the administration is killing them with their “inefficiency and the bureaucracy.”

In response Trump sent out multiple tweets including one which said, “Such poor leadership ability by the Mayor of San Juan, and others in Puerto Rico, who are not able to get their workers to help.”

Nicole Santiago, an undeclared sophomore at York, said that she was dumbfounded and shocked when she saw the tweets.

“I don’t understand how he can criticize her. She’s doing the best she can for her people,” said Santiago. “I mean I saw the pictures of her wading through the water trying to help people. Until he gets down there and does the same he has no right to criticize.”

Even after going to visit, Trump received criticisms from people for his remarks on Puerto Rico and especially his method of handing out supplies to the residents.

Trump was seen in a video throwing paper towels into a crowd with many people saying it looked like he was shooting into a basketball hoop.

“He thought he was at a basketball game,” said Nicole. “It was utterly ridiculous. He was treating it like it was a show.”

Even as he praised their relief efforts and talked about how he was going to help them, Trump was quick to remind them of the money they were spending and had already spent on them saying “I’d hate to tell you Puerto Rico but you’ve thrown our budget a little out of whack.”

Trump even compared the destruction that Hurricane Maria caused to the destruction caused by Katrina, seemingly saying that since not as many people died because of Hurricane Maria, Puerto Rico’s destruction was not a “real” catastrophe. At the time of Trump’s visit the death toll was at 16, but has since risen to 48 and continues to rise as problems like contaminated water and lack of medical supplies continue to pose a problem to relief efforts.

In response to Trump’s remarks on Hurricane Maria vs Hurricane Katrina, Taylor Jenkins, a history major at York, said that she found the comparison odd.

“Even if not as many people died people lost their homes, they lost everything,” said Jenkins.

Vasquez, the college’s coordinator of York’s Puerto Rican studies, said that to not call it a catastrophe is an unfair remark, “Many towns are isolated and we know very little about their conditions. They have only really managed to communicate somewhat but not by much.”

With only seven percent of the island’s electricity functioning, 40 percent of telecommunications restored and only 45 percent of the people having access to running water, the damage and recovery efforts in Puerto Rico are estimated to cost around 95 billion dollars.

York College has its own Auxiliary Disaster Relief effort joining forces with all CUNY campuses in order to raise funds to donate to organizations working in areas affected by the hurricanes in Puerto Rico, Houston, Florida and other parts of the Caribbean, and the earthquake in Mexico.

Students and faculty are also conducting their own clothing and food drives to help those living in areas affected by the hurricanes.

The Health and Physical Education Department put up a table where students and staff were able to drop off canned food, feminine hygiene products, diapers, baby food and first aid supplies.

The Center for Student Development, Academic Affairs, Administrative Affairs and the front lobby on the Academic Core building will also become drop off points for students and staff to donate food and supplies. CUNY designated the Jamaica Street Armory as the location where all CUNY queens campuses will drop off what they have collected through their own Disaster Relief Fund, according to Vice President of Student Development Vincent Banrey.

“We will have a save box on the lobby so students and staff can deposit money and at the end of the day we will send that box to Public Safety,” said Banrey. “We are also going to ask for volunteers, either students and staff, to supervise the drop off area in the lobby.”

The money York College and other CUNY campuses have collected through the Disaster Relief Fund will be sent to CUNY where it will be decided which amount of money will be sent to each organization such as the Red Cross, said Banrey.

Gisele Santana, a senator of the student government association, was able to get a large bin in order to start a drive to aid not only Puerto Ricans, but also victims in Houston, Florida and other Caribbean islands that were struck by the hurricanes.

“The bin is going to be here for two weeks,” said Santana. “Prior to that, people were donating since Hurricane Harvey.”

On Oct. 16, Santana attended the CUNY Board of Trustees public hearing with a group of students to advocate for the student activities fee policy resolution.

Every donation collected by the SGA will be sent to the Salvation Army.