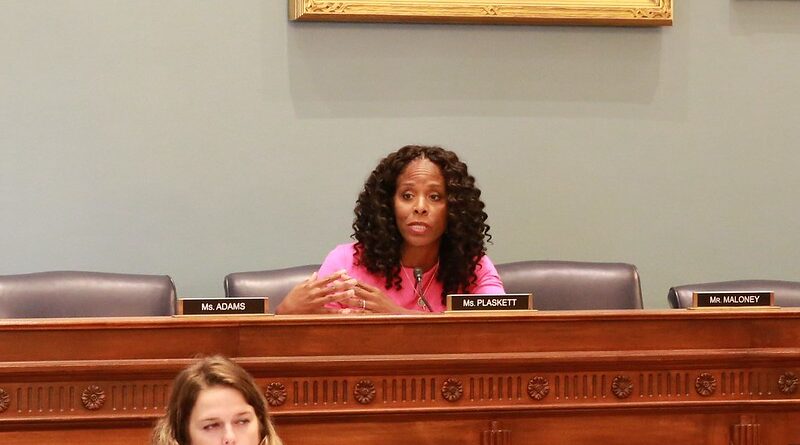 The Social Justice Institute show was formed in response to the worldwide protests last year over the police killings of Breonna Taylor and George Floyd. The goal of the Social Justice Institute is to give students and staff an opportunity to discuss important topics surrounding social change. This particular event in March was to discuss the rise of women of color in politics and the next steps in creating opportunities and positive change for future women.

Plaskett serves as a Democratic delegate to the U.S. Virgin Islands, but was born in Brooklyn. At the event, she addressed the struggles for women of color to enter politics, claiming that there is an economic wall holding women of color back. Plaskett recalled a January 2021 argument in the Democratic caucus that occurred because there were no black women in elected leadership positions, with a lack of funding to blame. She supported this claim by pointing out that Vice President Kamala Harris had to drop out of the presidential race because of inadequate funding.

She concludes from her personal experience that women of color need to support each other so they can succeed together in the future. She presented as an example the vice president, recalling that Harris reached out to her after the impeachment trial to congratulate her efforts in attempting to hold President Donald Trump accountable. On this call, Harris said “Girl, you killed it in the impeachment.” According to Plaskett, setting the tone for women of color helping each other more often is an important change that she wants to see.

Plaskett offered the example of the GI bill to make a comparison. After World War II, the GI bill allowed veterans to go to college, have homes, and take out small business loans. She said the economic growth bill might be similar and may include an increase for Pell grants, student loan forgiveness, support for homeownership, and small business creation so the black community and women of color can have power in America.

“It is about equity, not just equality,” said Plaskett.

Being that Plaskett lost her first election when running for congress, she offered advice for women of color who may feel a glass ceiling is holding them back to get over their hurdles.

“When nothing seems to help, I go and look at a stonecutter hammering away at his rock perhaps a hundred times without as much as a crack showing in it,” said Plaskett, quoting the nineteenth-century muckraker, Jacob Riis. “Yet at the hundred and first blow it will split in two, and I know it was not that blow that did it, but all that had gone before.”

When she lost the first time, she had her family to support her, helping her get back on the trail to run again. Plaskett’s advice for women of color dealing with failure is to keep going and create a support system so when you fail you can get back up and try again.

“If you have something you believe in and you are the best person to do it, you not only have to find the strength inward, but you also must create a tribe that will support you.”

In the second segment, three women, Karen Boykin-Towns, Damary Bonilla-Rodriguez, and Alicia Smith were introduced on the panel.

Smith is a York college alum who received her bachelor’s degree in social work and her master’s at NYU. She is part of IGNITE, an organization that supports women of color to run for office. Smith claims that her work has been easier since the summer protests when asked a question about the work of social justice.

“There are now a lot of women ready to take action looking for something to do and ways to impact change,” said Smith. “Women want to get involved to help their community.”

Smith noted that grants were given by IGNITE to women to join police commission boards in their communities and local government. This was an attempt to help control how policing is done in their neighborhoods and to prevent unjust policing.

Unlike Smith, Boykin-Towns said that her work is easier and harder since the social justice protests of the summer. She blames the lockdown and global pandemic for mental health strains and reminds everyone to take care of themselves during this period.

“It is not natural the way we have been for over a year now and so I would say it’s a double edged sword,” said Boykin-Towns. “The work goes on, and you have to continue, and you don’t have the time but you have to make the time to take care of yourself to continue to fight. If we don’t have our health we cannot make the achievements that we are so determined to make.”

According to her, the NAACP plans to prioritize economic opportunity for black entrepreneurs, help vaccine distributions, remove police from schools, restore mental health, and cancel student debt. Being part of the NAACP, she notes that hundreds of companies have made a public announcement on their commitment to giving money to Black Lives Matter and the black community.

Damary Bonilla-Rodriguez, born and raised in East Harlem, is the director of Leaders of Color in New York. She is the first Hispanic elected as a school director for the East Stroudsburg area School District (ESASD) in Pennsylvania.

Bonilla-Rodriguez agreed that it is easier for women of color to be inspired by the injustices surfacing publicly. She said that it is also harder when people in your circle and colleagues are sexist and racist. As an example, she called for a change in unprofessionalism happening during a recent school board meeting. Unfortunately, her response was not taken well, and believes this was due to her being one of two people of color in the room. She believes that to get the change you must have black and brown Americans sit in places of power.

“It is hard because the -isms have emerged,” said Bonilla-Rodriguez. “Now we are realizing people in your own circles, people you consider friends, and colleagues are racist and sexist,  and have all of these underlying prejiduces that you didn’t even realize. So it is putting us as leaders in a space of having to take action.”

“It cannot be us vs. us,” said Boykin-Towns. “The sharing of resourcing is not about having competitions.”

Being a leader in the NAACP she recognizes the organization needs to  collaborate with other organizations to make progress.

“We have the job of making sure we are training our leaders and weeding out those who are in it for the wrong reasons.”

One of the efforts Karen was a part of was Wind of Black Women. In this project, several business women came together and wrote two letters to Joe Biden to get a woman of color elected as the vice president when he was chosen to be the Democratic presidential nominee.

“It started probably April of last year when it was known that Biden had kinda secured the whole nomination and was pushing to ensure that he brought forth a black woman as his VP,”  said Boykin-Towns. “These are some of the most amazing women, many of the ones you see on tv, leaders in business, politics, and entrepreneurs, who wrote two letters for him to push for Kamala Harris.”

Alicia Smith said she has mobilized women of color to run for office, showed them how to get resources, ask for money, develop teams, public relations and set up a campaign to win, and pushed womens’ encouragement, which is her way of closing the gap. Smith agrees that working with an assembly member in government has been beneficial.

“If you can get the opportunity to work for an elected official that definitely helps,” said Smith who currently works as a constituent liaison for Assemblywoman Jamie R. Williams in New York’s 59th District in Brooklyn. “Being a York College student going from a volunteer and working full time for an assembly member who challenged me was important in getting experience. She [Assemblywoman Williams] laid the foundation for me to be a consultant and help others run for office.”