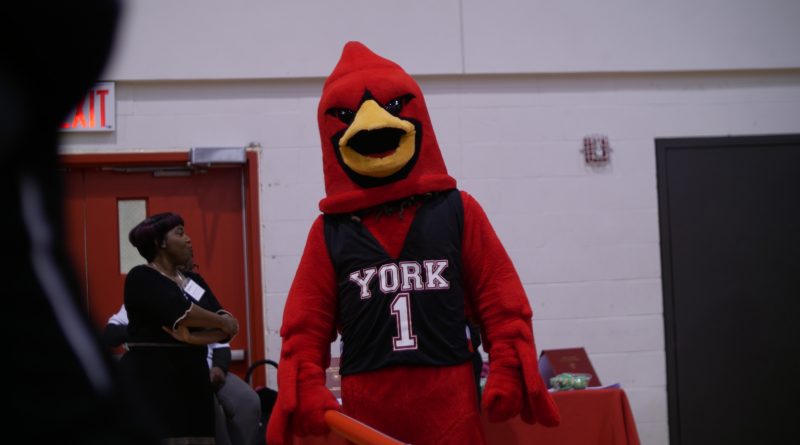 York’s mascot is represented by the Cardinal Bird and the Department of Academic Affairs is looking for students or even staff to wear the mascot suit. If you have ever been to any social event at York College, it is certain that you have seen the bright red, yellow-billed cardinal wearing a black, red and white York College sports t-shirt.

A mascot is responsible for bringing life to any events that a college has. According to Janira Calderon, York’s assistant facilities and recreation coordinator, and Jose Castillo, York’s head women’s soccer coach, the mascot-wearer has to be the center of attention at any given event.

“The individual wearing the Cardinal mascot needs to be energetic and animated,” Calderon said.

There are no requirements to be a mascot except an “energetic and fun spirit” as well as a 2.0 GPA.

In the past, students, student-athletes, coaches and staff have worn the mascot suit to ensure the mascot’s presence was at the college’s social events.

One student, Tatyana Kennedy, said they would be upset if they go to a sporting event at school and the cardinal mascot was absent.

“The cardinal just adds a different flavor and I really feel like its presence is a necessity at these events,” said Kennedy, an Interdisciplinary Studies major.

Apart from these things, the mascot- wearer is also expected to enjoy performing and not be afraid to burst a few dance moves.

Andria Webb, a 24-year-old, said she was not happy at a social event at York until she saw the cardinal mascot.

“I was honestly upset that my friend made me go to this thing because I was tired but then the bird came out and everyone got hyped,” Webb said. “So I decided to pay attention and before I knew it, I was as into the game as anyone else there.”

The Academics Affairs department is looking forward to this position being filled as soon as possible. It is also important to note that the employers of this mascot position are flexible with all types of schedules and are looking for multiple persons to fill the position.

“It would be great to have the Cardinal mascot competing in our intramurals programs, taking advantage of the recreational activities as well as adding to the gameday experience at our home events,” said Castillo.