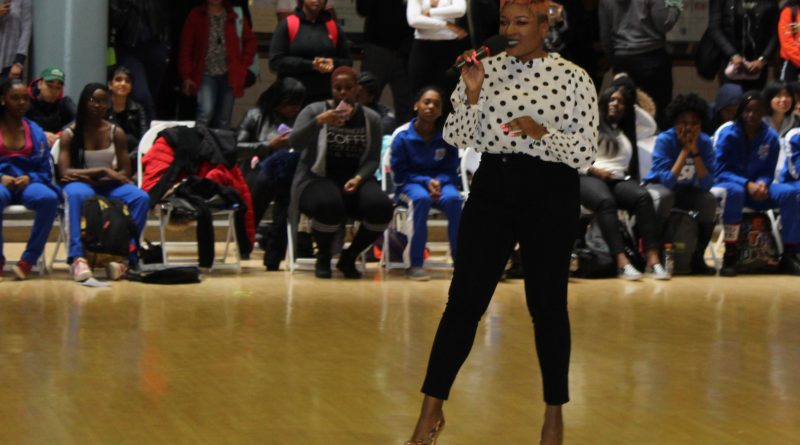 Miya Bass, a 2008 York College Alumnus who earned a position on The Voice on NBC to compete in a singing competition, visited the college for a pep rally held for her on April 10.

Bass, 29,  performed Issues by Julia Michaels at the rally. This was also the song she performed during her blind audition in the season premiere of the American reality television singing competition in its 13th season. Bass’s voice turned around only one coach: Adam Levine.

“It was phenomenal working with Adam,” said Bass on the show after she got eliminated from Levine’s team and got stolen by Keys. “He’s amazing and he’s brilliant. And now, I’m super excited to work with Alicia now.”

Levine is one of the four coaches who compete to have their best artist win the singing competition. The Voice premieres with a blind audition where coaches have to listen to singers sing and pick their team of artists to mentor throughout the season. The other coaches for this season are Blake Shelton and Kelly Clarkson.

During the next portion of the show called “the battles,” where two contestants from the same team duel in a duet, Bass performed Knocking on Heaven’s Door by Bob Dylan with Drew Cole. Levine ended up choosing Cole over Bass. This made Bass available to either be stolen by other coaches or be eliminated from the competition.

“The two of you kind of encapsulate all that I love about music,” Levine said to Bass and Cole after the singing duel. “The style, who you are as vocalists and what you’re able to do together. This is your wheelhouse, both of you. I’m going to make my choice based on a strictly good feeling that I have. There’s just something about this person that makes me feel like I need to be connected to them and continue on.”

Bass majored in Movement Science while she was at York and took classes after graduation to pursue a degree in Education. She was also a college assistant in the Men’s Center. Bass starred as Aida in Elton John and Tim Rice’s musical Aida presented by the York College Theatre at the Milton G. Bassin Performing Arts Center in 2015. She continually works with the York College Gospel Chorus and York College Theater Programs.

“I have worked with her for several years and she continues to amaze me,” Jonathan Quash, the director of the Men’s Center and the York College Male Initiative program, wrote in an email. “I do truly believe that Miya has the talent and dedication to make it to the end, but regardless of wherever she finishes, she is a winner for making it this far. She is the perfect example of what someone can do post-York College or any college as long as you never give up; never stop following your dreams.”

Bass is a resident of Jamaica, Queens who comes from a family of law enforcement. She followed in her family’s footsteps and worked for NYPD as a police cadet. She made a decision to leave her job and pursue a career in singing. In the past year, Bass quit her job singing with an 11-piece funk band called Funktion 11 while being a struggling New York City artist until she gained attention on The Voice. Quash wrote that she intends on applying for the new Master’s of Social Work program at York as soon as she can.

“I don’t know her personally, but I’m proud of any Cardinal that is working on their dream as hard as Miya has,” said Brunilda Almodovar, an associate director of the Academic Advisement Center. “I was extremely happy when Alicia Keys stole her. It will give her the opportunity to continue to shine.”

As The Voice moves along in its season, contestants have to be eliminated by coaches until it gets to the live segment of the show. The contestants will be voted to stay in the competition by viewers as the show airs live.

Unfortunately, Bass was knocked out of the competition by Alicia Keys on Monday, April 2. Keys advanced Johnny Bliss, Bass’s opposition, to compete in the live playoffs where the audience begins to vote for artists to remain in the competition.