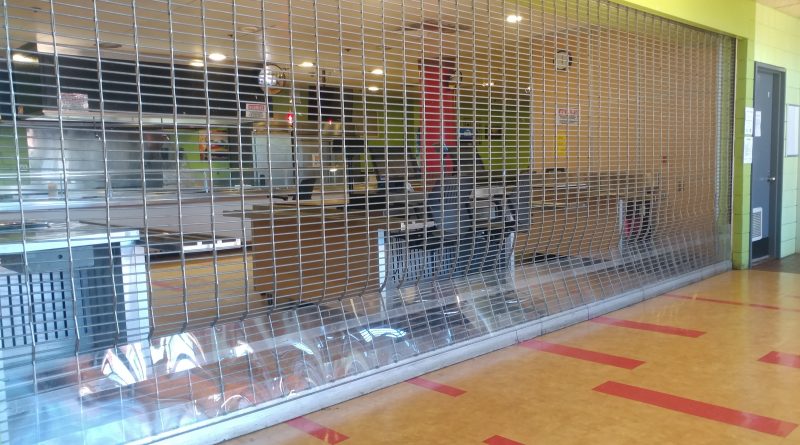 In a new twist on the old Yogi Berra line, “deja vu all over again,” the York College cafeteria was closed by the Board of Health when it wasn’t even open for business, subsequently given a clean bill of health and yet it still remains shuttered.

What began as a temporary closure because of an expired contract escalated to a full shut down when city inspectors showed up on Sept. 10 and ordered the facility unfit for sanitary food preparation.

The cafeteria had been closed since June due to a lack of contract between Aladdin Food Services, York’s main food supplier, and the the York College Auxiliary Enterprises.

“(The contract) was most recently extended for three months through September 30, 2019 under a modified agreement,” Perez wrote in an email response. “We are currently discussing with Aladdin another extension through December 31, 2019, for grab and go food service at the Cardinal Café and catering services.”

The Sept. 10 inspection cited five sanitary violations that led to the closure of the cafeteria. Health inspectors cleared the cafeteria violations as of Sept. 19 and it is no longer listed as closed on the department’s website.

According to a campus-wide email, the college will not be opening the cafeteria despite the clearance as it continues its own internal review of food services.

“When the cafeteria is re-opened, it will be done in a manner consistent with our responsibility to ensure that such services are provided in a safe and healthy manner,” the email added.

Some of the violations included hot food not held at or above 140 degrees, evidence of mice or live mice present in the facility’s food and/or nonfood areas, food not protected from potential source of contamination during storage, preparation, transportation, display or service, facility not vermin proof, harborage or conditions conducive to attracting vermin to the premises and/or allowing vermin to exist and plumbing not properly installed or maintained, anti-siphonage or backflow protection device not provided where required, equipment or floor not properly drained and sewage disposal system in disrepair or not functioning properly.

Following the Sept. 10 closure, the campus did not immediately notify the college community until Sept. 13 after a news article on Patch.com about the closure was published on Sept. 12.

Attempts to get a comment from the administration about the sanitary violations and closure were stalled until publication. However, the college sent out an email to the college community.

“As part of the College’s comprehensive review of its food services, please be advised that, as of Monday, September 16, 2019, there will be no food service available from either the first-floor cafeteria or the second-floor cafe,” the email stated. “Individuals are advised to make alternate arrangements for meals during the course of the day. The cafe will continue to serve beverages and pre-packaged foods from outside vendors. Please be further assured that the College is taking all possible steps to address and correct this matter as quickly as possible, consistent with its responsibility to ensure that such services are provided in a safe and responsible manner.”

Although the cafeteria had been closed, a limited selection of food had been available to the college community via the Cardinal Café until Sept. 30 as well as through catering of events on campus. Perez told Pandora’s Box that a full food service is not sustainable for the college and Aladdin.

The City University of New York, in April 2018, initiated a process to find a single vendor that will provide food services throughout the University or to identify several vendors which will each serve multiple campuses. According to Perez, the extension through December 2019 with Aladdin would have been a temporary arrangement until the University-wide food service vendor has been chosen.

As of Sept. 26, the College announced that it will not renew its contract with Aladdin which expires Sept. 30.  As a result, the cafeteria and the Cardinal Cafe will be closed until further notice, as of Oct. 1.

“The cafeteria being closed is very stressful (for me),” Capera said. “The Aladdin cuisines weren’t like that from a five star restaurant, but they got the job done. I don’t always want to go outside for food and it is inconvenient now because I have to plan my lunches rather than just easily grabbing something from the Aladdin kitchen.”

The College has also secured agreements with food truck vendors to be available on Guy R. Brewer Blvd to expand eating options. The food trucks will provide the campus with an assortment of breakfast and lunch food options for purchase every week from Monday to Friday.

“We understand this causes a hardship to the campus community and is disruptive to your daily routine,” a college-wide email on Sept. 27 stated. “Because of a CUNY-wide process to determine food services for all campuses, we cannot commit to a new long term contract as a campus. However,  we are continuing to explore options to re-open the cafeteria and Cardinal Café as soon as possible to provide the college community with service once again.”

The college’s cafeteria has had a history of sanitary violations. Last fall the city slapped the college with a host of similar violations as the most recent batch. At the time one Alladin official blamed the college for not keeping the building and its plumbing up to code, while administration officials countered that many of the violations were the vendor’s fault.