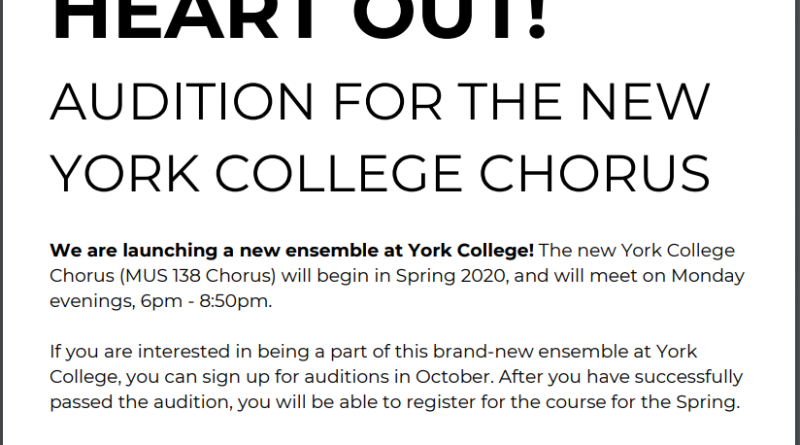 The Music program is announcing some new initiatives as the department of Performing and Fine Arts seeks to expand its offerings.

The program will be starting a new ensemble that will be known as the York College Chorus. According to George Lam, the co-coordinator for the program, this will be the third ensemble for the college.

The chorus would be a one credit course that will meet on Monday evenings starting in Spring 2020. Lam also mentioned that the chorus will have a mix of different music such as classical, jazz and pop.

“It’s exciting because York college has always had a chorus and it’s been dormant for at least the last ten years or so, “ Lam said. “And so, the faculty is very excited to bring it back.”

“We’re also in the process of searching for the new choir director, that is, the person that is going to teach the chorus so we’ll have everything in place for this ensemble by spring,” Lam added.

The course is not limited to Music majors or minors as it is open to all interested students in the York College community. Any interested student is encouraged to sign up to audition at the bulletin board at AC-1B11 for permission to enroll in the course. The classroom currently has a limit of 30 students, but Lam said if the demand is high, they will look for a different room. At the moment, the course currently has a cap of 30 students.

Another initiative would be the Lecture+Masterclass series for the academic year. According to Lam, this would be a music program series where music professionals are brought in to talk primarily with Music majors and minors but the talk would be open to everyone in the community.

“A Masterclass in terms of music and theater means having a master or mentor and have him or her teach someone else but have that be open and other people observe,” Lam explained.

“For example, if I teach you how to sing but then we have an audience who are people also interested in singing,they also learn and see how you respond to me and how I teach you etcetera,” Lam added. “So, that’s the Masterclass.”

The first Masterclass begins with pianist and composer, Aruán Ortiz on Oct.10. At this lecture series, a few music students will perform for him and get his feedback. The second Masterclass is planned for November with Toni Ann Semple, who is a singer-songwriter as well as a producer. She will listen to works and tracks from student producers and give them feedback and comments.

The faculty picks the master teachers and students sign up to play for the masters. The schedule for the Spring 2020 Masterclass series is yet to be finalized.

Part of the expansion would also include broadening the Music major and increasing its credits from 43 to 50 to complete the major. There is also a new minor starting this Fall in Music production that is available to all students and designed in such a way that Music majors could also minor in Music Production.

“So, there’s a lot of folks who are interested in being producers, making beats, making tracks, rapping, recording and they are already using some of the equipment in their homes,” said Lam. “They will be able to learn more about it with this course. So, you don’t have to major in Music to minor in Music Production.”

To build up college morale, the Music program has installed a pop-up upright acoustic piano on the second floor next to the Cardinal Cafe. The piano is open for anyone to play.

Lam said the idea was inspired in part by similar public pianos in the city like the one at Port Authority and in Madison Square park. The red piano currently features a “Play Me!” sign to invite students to utilize it.

“It’s part of our idea of sort of just creating a coffee house sort of cafe feel for that space,” he said. “This is a collaboration with Buildings and Grounds and the Office of Academic Affairs.”

“We’ll launch the project with a concert soon, sometime in the fall and we’ll kind of use it as a performance space,” Lam added. “Maybe students can get together and just do a little concert or open mic at Starbucks which will be completely new at York College.”

The program is also hoping the piano becomes a point of visual art interest where a rotating team of students can decorate the piano in a certain way, perhaps once a year. The piano, which has been used in a theatrical production on campus, is currently painted a light shade of red.

Lam says the program is looking to apply for grants to keep the piano in tune and maintain it so it can be an ongoing resource for the community.