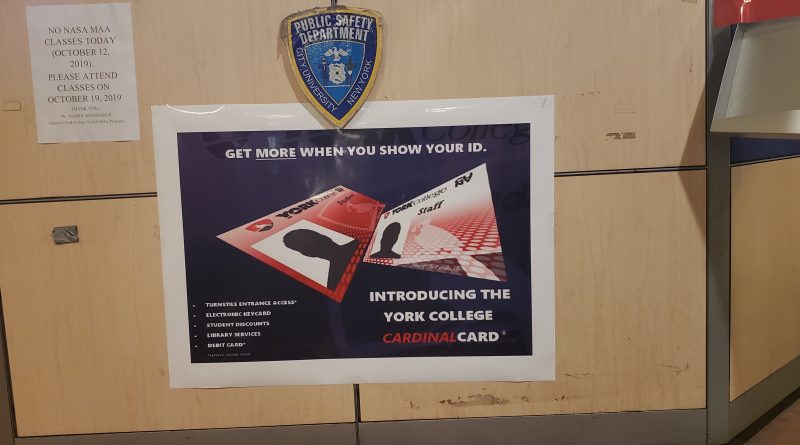 York College is getting prepared to roll out a new cardinal ID.

“The whole conversation for the new ID started because the chief and I hated the old ID because it was antiquated and it didn’t look like anything you see in CUNY nowadays,” said Khalid Clarke, a campus security specialist with York’s Office of Public Safety. “If you look at other college’s IDs, they look kind of cool and our old ID just has a picture of the building. With the students in mind, we decided to do something, an updated ID.”

The IDs would work with the new turnstile system that the college is also introducing. The ID would capable of being read by those turnstiles and also double as an electronic key card that can open certain doors.

“We’re actually in-between technologies and we’re trying to find out which type of turnstile would be the best for us to use,” Clarke said. “Pretty soon, you’ll be able to use a virtual card on your phone, so you won’t have to use a physical card and be able to access all those functions on your phone. That’s what we’re going for.”

Clarke also said students and staff could use the new IDs as a debit card for library services, vending machines and other transactions in the near future.

People without the cardinal ID would have their state ID scanned physically by a public safety officer.

“It is something to look forward to and be excited about,” Clarke said. “Most of the freshman have it. We are planning on the roll-out of the IDs for faculty and the rest of the campus community.”

According to Rufus Massiah, the Director of Public Safety, the turnstile project is a York Capital project that is being done by DASNY, a New York State agency that deals with building. Massiah said the Cardinal ID would be rolled out depending on the time the turnstile project would start. DASNY officials said the project should start sometime next summer.

“That’s why we’re careful when rolling out the new ID,” Massiah said. “We don’t want to do it twice. Come January, if we have a better date of when everything will be rolled out, we will start rolling out the ID for the students.”

The college is also preparing to change all entrance doors in the Academic Core building as part of the capital project. According to Massiah, the new doors would have handicap accessibility and would be more efficient.