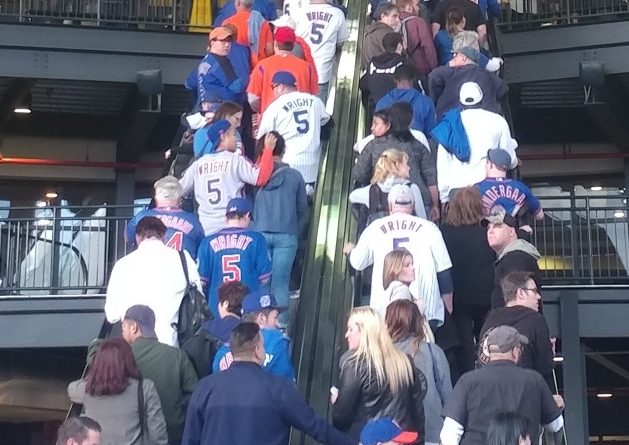 Fans were out in full force wearing their David Wright gear for his last game. Photo credit: Richard Heaton.

Imagine paying $15 for a ticket to a baseball game and then selling it that same day for $215.That’s exactly what happened in mid-september with Mets fans buying tickets to the September 29th game, their penultimate game of the season.

Why did prices jump? Because of David Wright. The Mets all-star third baseman announced that he would start that game and that it would be his final game.

On September 13th, Wright held a press conference where he made the announcement and that was when all hell broke loose. The announcement was made just before 2PM and by midnight, the game was sold out.

On the Mets official website, before selling out, the cheap promenade tickets cost just $24 before fees. One day after making the announcement, these same seats started at $100 on resale sites.

People who bought tickets because they want to go wouldn’t have been listing theirs unless something major stopped them from going. So most of the expensive tickets were held by people who either didn’t care about the game or were keeping one for themselves and selling a bunch.

Some people might call this evil. These people are using these tickets the same way that someone would play the stock market. But in the process, this small group of “hustlers” took away a chance at fair ticket prices from thousands of fans.

The thing is, it worked. People still bought up nearly every super expensive ticket. if the tickets didn’t sell, there would have been thousands of empty seats at the game. In reality, there was a fan in nearly every seat and Citi Field had one of its biggest attendances in its 10 year history.

You can’t blame Mets fans for spending an extra hundred dollars or more to get a ticket. After all, this is David Wright that we’re talking about. In the future, he’s going to be one of the players that synonymous with the Mets.

Wright has been with the Mets for nearly two decades after having been drafted in 2001 and has played in more than 1,500 games. Ever since making his debut, the seven time all-star has grown into one of the best hitters in Mets history.

Currently he owns numerous Mets records, and in 2013, he became the Mets captain after the team went eight years without one.

Unfortunately, Wright wasn’t really able to reach his full potential because of injuries. At the start of the 2015 season he was diagnosed with Spinal Stenosis and missed more than three fourths of the season.

After recovering, he was able to play the final month of the season and the first two months of the 2016 season, but then he was shut down again.

Entering September 2018, his last game was on May 27th 2016, more than two years ago. There is speculation that had he not kept getting injured, he could have been an easy pick for the Hall of Fame.

During his final four seasons, he missed more than 500 games and will miss out on the last two years of his contract. Even with his team leading numbers, they could have been so much better.

Despite all the struggles that he faced, Wright will still go down as one of the best hitters in history of the team, if not the best.