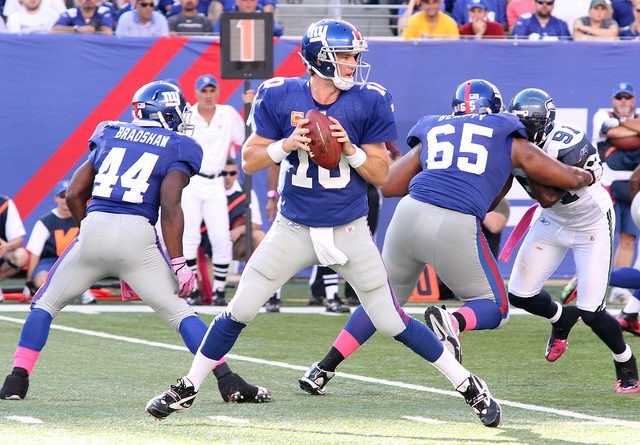 Eli Manning has been having a terrible season this year with the New York Giants. Left and right, numerous fans have been calling for the Giants to get rid of him before they lose more games. Halfway through the season, the Giants were 1-7 and Eli only got worse with each game.

But just because he’s having a terrible season and fans want him gone, doesn’t mean that they don’t still love him for what he’s already done for the team. In reality, his recent stretch of failures were just one small roadblock during a long career of success.

It even makes you wonder if Eli has what it takes to make it into the Pro Football Hall of Fame. He’s played 14 seasons entering his 2018-2019 campaign and for the most part he’s put up numbers similar to other Hall of Fame players and great quarterbacks.

He won’t be able to reach the same stats as his brother Peyton Manning, but has been able to make a great name for himself during his time with the Giants. One of his greatest achievements was his ability to consistently rack up a lot of passing yards every year.

He went 13 straight seasons throwing for at least 3,000 yards and looks like this year is going to make 14 easily. Entering the halfway point of the 2018 season, Eli had a little more than 54,000 total passing yards under his belt.

That’s a lot. Only five quarterbacks have more, and they are all either in the Hall of Fame or well on their way. The other five players include Peyton, Drew Brees, Tom Brady, Brett Favre, and Dan Marino.

Marino finished his career with 61,000 passing yards, so it’s unlikely Eli can pass him and claim fifth unless he played for another two or three seasons after the conclusion of this one.

When it comes to passing touchdowns, Eli is also near the top and is in great company. At the seasons halfway point, he had 347. Only six quarterbacks have more. If you look at the 14 quarterbacks with the most touchdowns, you begin to see a pattern. They are all either active legends or already in the Hall of Fame.

Including Eli, six of the 14 quarterbacks with the most touchdowns are still playing today and each of them are stars. This list still includes Brady and Brees, but also includes the likes of Aaron Rodgers, Phillip Rivers, and Ben Roethlisberger. Two of the 14 players have recently retired and are not eligible for the Hall of Fame but are still considered legends. This list features Peyton and Carson Palmer.

The remaining six players on this list are all Hall of Fame members. In fact, no quarterback who’s eligible for the Hall of Fame and threw more than 275 touchdowns was denied entry. Eli will most likely finish this season with close to 360. It’s also possible that he can pass Rivers for sixth most passing touchdowns.

It’s also possible that he keeps playing next season, but if he does, it would most likely be with another team. If he does keep playing for another season or two, at least until the age that Peyton retired, his numbers could get even better.

If his total numbers aren’t enough to get you on his side, then look at what he’s done during individual seasons such as awards and what he’s done for the team. He was selected to play in the Pro Bowl four times in his career and the Giants won the Super Bowl twice with Eli.

It’s clear where Eli stands next to other football legends despite his poor performance this year. Once he’s eligible to enter the Hall of Fame, he should be one of the first few from his class to make it in.