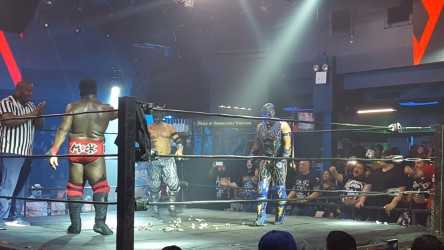 At La Booms Nightclub on Northern Boulevard in Queens, fans lined up for the start of the wrestling television drama series Lucha Underground on Saturday, Sept. 9.  Numerous wrestlers, like Willie Mack, Matt Striker and Johnny Mundo where there to participate in the event.  Fans were wearing their favorite luchadore’s mask waiting to get in to see some exciting Lucha Libre action.

Originating in Mexico, Lucha Libre is a sport known for its high-flying action, athletic ability with wrestlers wearing masks and capes. Each wrestler has their own unique mask designed, with distinct colors and features. Lucha Underground Mexican wrestler Drago has become very popular with the American audience. Drago uses a dragon like mask that captivates the audience.

“The mask is my own identity, it’s my way of expressing me to the public and every time I present myself in a ring, with my look I give life to Lucha Libre,” said Drago.

The Lucha Underground series involves wrestlers who almost seem like superheroes. Mexican luchadores are no strangers in being on big screens, as some of Mexico’s most famous wrestlers have starred in their very own movies.

Former WWE wrestler and Queens native Matt Striker is one of the current commentators for Lucha Underground and has traveled all around the world. “It was once said that if something looks good, you will see it. If it sounds good you will hear it, if it is marketed good you will buy it, and if it’s real you will feel it,” said Striker, as he described his passion for the sport. Striker says those looking for alternatives to the traditional sport of wrestling may find Lucha Libre to be entertaining.

Eric Bemben, 37, a longtime wrestling fan, was very impressed by the series. “Lucha Underground in itself is a very well produced television show, with the matches being quick paced and it almost looks like a stunt show,” says Bemben.

The show is in it’s third season and airs Wednesdays at 8 p.m. on the EL Rey Network.  The show is also on Netflix, however Netflix has only the first 2 seasons.