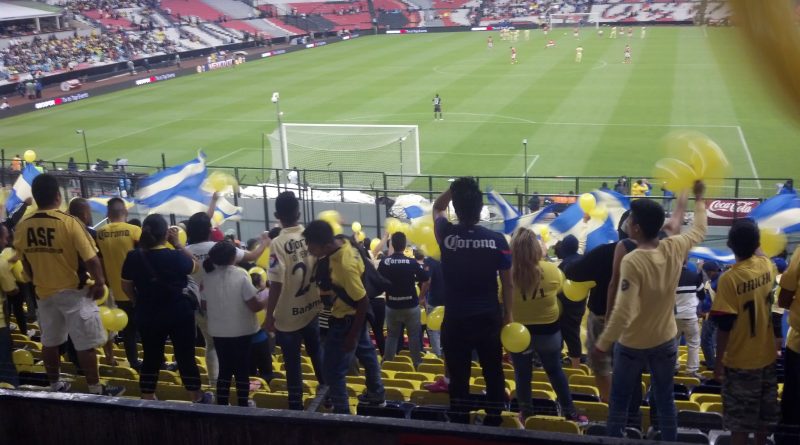 The round of 16 Confederation of North, Central American and Caribbean Association Football (CONCACAF) tournament began on Tuesday, Feb 20.

The region’s best soccer club, Club America, is set to play against Costa Rican club Deportivo Saprissa. Club America is known for being the most successful club in its region and CONCACAF, for having the most league and international championships. Fans show excitement to see Club America compete, just ask super fan Loth Ramirez.

“Club America is my life, I sleep, breath and live this team,” says Ramirez.

Ramirez, 30, is a Mexican born United States citizen, who came to this country when he was 15 years old. Ramirez was born in Nezahualcóyotl, Mexico.

“I have been an Americanista (fan of Club America) all my life, since I came out of my mother’s womb until now,” said Ramirez.

There have been many magical moments for Club America that makes their fans feel that they can identify with this team. “To me America is the best team, because of its history, its players, and the colors,” said Ramirez.

Americanistas believe the team is measured by one thing; win- ning. Ramirez’ passion for the team goes beyond just putting on one of his jerseys. Ramirez belongs to a barra brava, a fan base that follows their soccer team everywhere they go. They are very loyal fans.

“Being a fan of this team gives me life,” said Ramirez. He went on to say “I identify with every moment, the success and the losses, it makes me part of something bigger.”

The barra brava that Ramirez belongs to is La Monumental de Nueva York.

“This group started off in Los Angeles, California. One of the members that lived in L.A came to live here in New York, and on the Internet I saw that there were going to form this group so I joined about three years ago,” said Ramirez.

La Monumental, La Monu (short for La Monumental), rents lounges, goes to public parks and people’s backyards to watch the soccer matches on a television. They line up about 20 to 100 people with big drums, trumpets, flags, trombones balloons and confetti to sing and cheer in front of a television.

“We are here to support Club America, if you want to record you can. However if we see you texting or just standing there we are going to warn you, hit you over the head or just force you to leave. This is my passion just like many other people here,” said Ramirez.

Ramirez does not miss the games. Even when at work he will try to watch the game. “I remember one time Club America was going to play at six and I didn’t get off work until six thirty,” Ramirez said. “I would rush back and forth from the front cash register to the back where I had a little television. If they are losing and I am not watching, I feel like its my fault for not giving off my good energy.”

Ramirez’ passion for his team not only is shared with this supporters group, but is also shared with his family. Ramirez has been a fan since he was four years old and Club America is the go-to team for his relatives.

Ramirez’ mother, Gaby, 40, inherited her love for the team from her parents and passed it on to her two sons. “I feel like my blood is yellow and blue, I have a tattoo of the team that says you will never fly alone,” said Gaby. Club America’s nickname is the eagles.

Gaby knows Ramirez the best and knows exactly how passion- ate he is about the team. “My son cries when the team loses. He gets mad and he may not want to talk about it, but if they win he is happy, joyful and very nice to be around,” said Gaby.

Gaby like her son is also a member of La Monu.

“There was this one incident where I am walking out of the stadium with Ramirez and a member of La Rebel, comes and punches me in the eye. Then steals my shirt,” said Gaby. To this day, Gaby still has the bruise on her eye.

“If we see a person wearing La Rebel shirts, we confront them and the same vice versa. It is more of a rivalry to see who has the better supporters group are rather than who is the better soccer team,” said Loyda.

Pumas of Unam and Club America have faced each other in three league finals and America was victorious for two out of the three encounters.

“One final between America and Pumas during the 1984-1985 season was played in La Corregi- dora Stadium, there were a lot of missed calls by the referee that favored both teams. In the end America won and ever since then the Pumistas (Puma fans) have been bitter,” said Loyda.

For many years, the supporters from Pumas believed that Club America represented the cor- ruption and the government in Mexico.

“America bought one of Pumas star players, Enrique Borja. When he comes to play for America, he was very successful and became one of the best players in the league,” said Loyda.

These two teams have also faced each other in many playoff matches where America has won most of the matches over UNAM.

“When these two teams play it pretty much paralyzes Mexico City. Throughout the history between the two teams, we pretty much call Pumas our sons,” said Loyda.

Despite how dangerous being in a barra brava may be, Ramirez’ passion for his team hasn’t gone away.

“I sleep, eat, dream and wake up thinking of Club America,” said Ramirez. He continued to say, “This is my life and my maximum passion.”