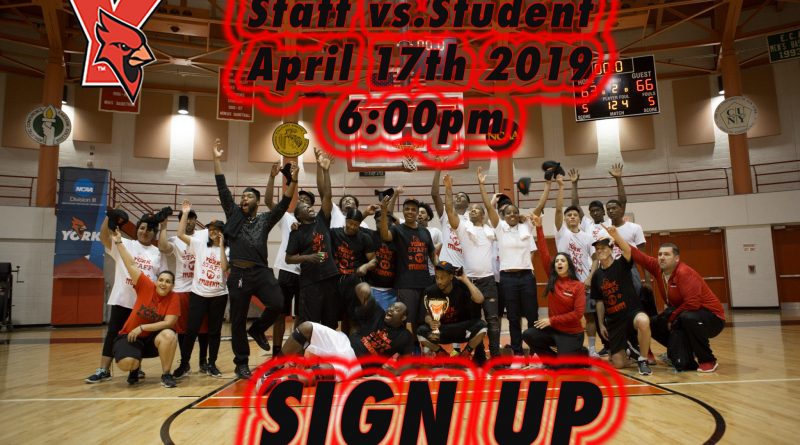 York College faculty members are looking to repeat their win against York students during this years staff vs. students game on April 17 at 6 p.m.

2019 marks the third straight year that the athletic department has hosted a staff vs. students game and it has been an enjoyable experience for past participants. This year’s contest will award prizes and feature surprise participants.

After a month-long poll on the York Athletics website, consisting of 100 votes, basketball was chosen as this year’s game, winning more than half the votes, beating out soccer, volleyball, and softball.

Students participating in the game are looking forward to avenging last year’s contest that ended with the staff coming away with the victory.

Denee’ Barracato, York’s Athletic Director, coached her team last year to victory after a hard fought battle against the students. The athletic director will once again coach the faculty team against the students and is hoping to have a repeat performance.

“I’m not playing I know my role,” Barracato jokingly said. “I will be coaching the game again. We’re reigning champs and I’m looking to win again.”

Amy O’Connor, the Head Athletic Trainer, shared her thoughts about last year’s game and what to look forward to this time around.

“Jamel Gist on the staff team played some exceptional basketball,” said the athletic trainer. “I think our men’s and women’s basketball coaches had a great time refereeing the game as did our two basketball athletes who coached the student team. The vibe around the event was very positive and the game was played in great spirit.”

The winners of the game will receive a trophy and of course bragging rights. The trophy that was won last year is currently being displayed in the public safety office until the students can win it back from the faculty.

“The students will be looking to bring it back across campus this year,” said O’Connor. “I’m sure!”

Both students and faculty members were eligible to sign up on a first come first served basis for the basketball game. Registration didn’t close until all 15 roster spots on both teams were filled.

The only caveat to the rule is that students that are currently on the basketball roster aren’t eligible to participate. However, student athletes are eligible to coach the student team.

Both students and faculty members are eligible to sign up on a first come first serve basis for the basketball game. Registration will stay open until all 15 rosters spots on both sides are filled.