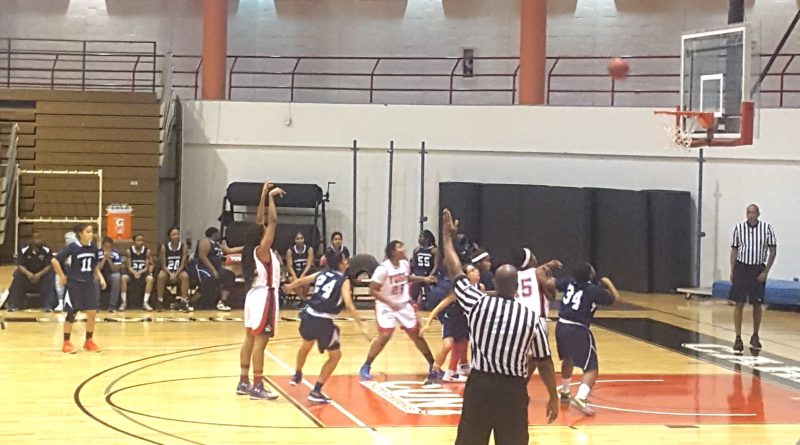 “It’s not a lost; we would have played completely different if it was a game that counts.” Coach James said. “Right now I just want to see what certain girls can do in certain situations.”

Coach James played eight freshmen’s at different times of the game unaware of how they play do to the lack of practices the team has had.  Coach James says they really only had two practices. The volleyball team practices a lot in the gym along with the men’s basketball team, and trying to get practice organized with everyone schedule has made it hard to have time to practice.

“We need to work on offense more but it’s not that bad of a game for the first time we done it,” said Coach James.

The highlight of the game was with 06.2 seconds left until the end of fourth quarter. Score is 49 to 51 Queensborough Lady Tigers are up by 2. A foul is called on York Cardinals, both free throws are missed. Queensborough gets the ball and the head coach quickly calls a timeout.

After the timeout, the ball is inbound but a Cardinal Player draws a foul on a Queensborugh player ;having her go to the line to shot two free throws. The first and second free throws are made; Coach James quickly calls a full timeout with 01.9 seconds left of the game; now score is 49 to 53.

The gym is completely silence; people in the bleachers are at the edge of their seats. Cardinal inbounds the ball but with hardly any time left on the clock a shot is thrown up but missed ending the game with Queensborough Lady Tigers winning by 4.

“I think the game was good just more communication, more on help defense, we need to also work on our offense but we did well.” Roscher said. “My team hustled and you can see they are willing to learn and work hard.”

For Roscher the scrimmage was a learning experience, everyone got to see what people can do, how they will play their role and how they will contribute to the team.

York college women’s basketball team so far consists of 8 freshmen’s and 4 returning players. Transfer student from Fulton-Montgomery community college, Evanda Redwood, is one of the new players on the team. Redwood was the lead scorer for the cardinals; her points were mostly layups and jump shots.

“It feels good especially since I didn’t play basketball last season.” Redwood said. Even though it was just a scrimmage, Redwood was disappointed in the lost. “We should have won; we need to work on being together more on the court and our defense.”

York women’s basketball team The Cardinals has a few weeks left to practice before the season officially begins. The scrimmage was a learning experience, Coach James and all of the players on the team got to see how each player played and how they will work together as a team. The Cardinals agree that they need to communicate better and work harder on defense and offense. The first official game of the season is Tuesday November 15 at York College at 6p.m. against New Jersey City University women’s basketball team The Gothic Knights.