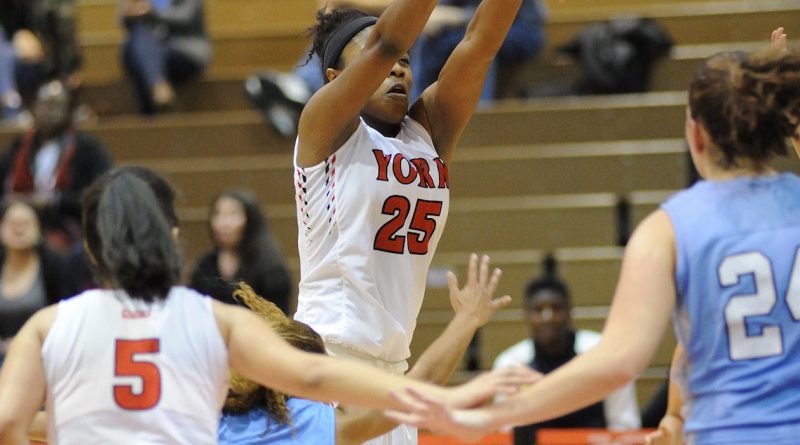 The York College women’s basketball team held their first tryouts in the PE building Gymnasium before the team entered its new season on Sunday Oct. 15.

In order to tryout, players needed to have a minimum GPA of 2.0 and be registered as a full time student with a minimum of 12 credits. The tryout rules also required students to submit a physical test with the new head athletic trainer, Amy O’Connor.

A concussion baseline test provides information on the brain functionality of an individual who’s received a head injury at one time. The physical allowed for a thorough checkup on all previous health concerns that O’Connor reviewed in order to permit applicants to compete. With tryouts over and new personnel in charge, the team looks to improve and have a better season.

The women’s basketball team experienced a management change when Anastasia Bitis was hired as their new head coach.

“I found the job on the NCAA Jobs site,” said Bitis, as she described the head coach position hiring process. Bitis is going into her first year as coach for the women’s basketball team, with players and staff behind her efforts.

“I was hesitant at first, but Coach Nolan from the men’s team encouraged me to make the jump,” said Bitis.

Team member Shanice Cadogan spoke highly of Bitis when asked about how the new coach is doing in preparation for the season.

“Pre-season has been really good, she (Bitis) very committed and very energetic,” Cadogan said speaking about Bitis’ preparation for the season. “She wants us to win, so she’s doing a whole lot to make sure we are pushing each other.”

The team ended last season with a 2-23 record.  Going into this season, Bitis wants to shake things up.  Bitis stated that she looked for specific qualities when it comes to the players she wanted for her team.

“We are looking for work ethic, attitude and willingness to commitment,” said Bitis. “We looked for students who would have a positive influence on our team culture.”

Team member Evanda Redwood also spoke on the new culture of the team and her outlooks.

“Last year we didn’t really have a lot of commitment, like this year I think the girls are more committed,” said Redwood.

For Redwood, this will be her second and last season on the team. She believes her career will finish on a high note.

“I feel like we are going to win a chip (championship), we have to go big or go home,” she said.

This season is about growth and redemption for the women’s basketball team.

Diamond Jackson, a member of both the women’s soccer and basketball teams, joked about how big her calves have gotten playing soccer and how she will, “…be able to run, without dying on the court.”